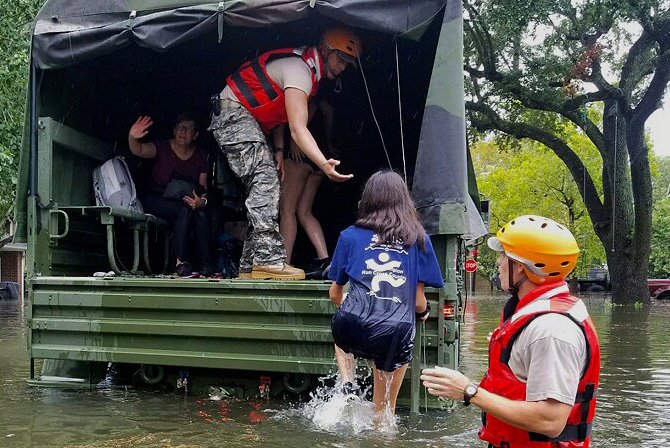 Exchange Supports Troops and Military Community Before, During and After Hurricane Harvey

Our capabilities with respect to supporting military personnel in times of emergency are a critical component of the Exchange’s relevancy.

When Joint Base San Antonio-Lackland Food Court Manager Racquel Hinson and her team received the call to help the Texas Air National Guard by catering Popeyes meal to local shelters, they sprang into action, quickly making and packaging 350 meal boxes so people staying in shelters could enjoy hot food. 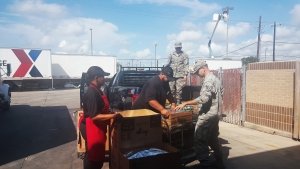 This is just one of the many stories of Exchange support before, during and after Hurricane Harvey.

As Hurricane Harvey lashed the Texas coast on Aug. 25, dropping historic amounts of rain, the Exchange was on call, ready to support troops and the military community. The Lackland Exchange food court and theater received Command permission to stay open after the base closed down during the height of the storm, supporting Basic Military Training graduates restricted to the base because of the hurricane. 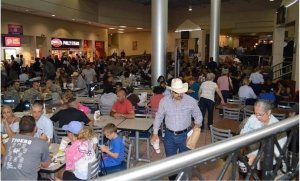 Lackland food court and theater stayed open for Airmen during the storm.

Austin’s Camp Mabry Exchange received delivery of bottled water to support evacuees from Houston. The Exchange adjusted store hours to allow authorized evacuees to shop after arriving on base.

The Waco Distribution Center, located in the heart of Texas, stocked up on water in preparation for Hurricane Harvey relief efforts.

On Aug. 30, leaders at the Texas State Guard formally requested mobile field exchange (MFE) support for troops deployed to Camp Swift in Bastrop. By noon, Aug. 31, the MFE was up and running with a stream of guard members stocking up on beef jerky, shampoo, sports drinks and more.

“To have you guys here with some of the comforts of home, it’s so welcomed,” said Texas State Guard Captain Army Chaplain David Fish. “These guys go out on their missions and don’t know what to expect, but knowing that you’re here is a true blessing.” 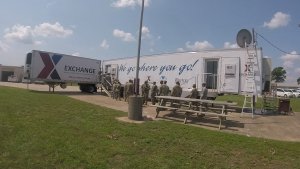 Troops line up to visit the Camp Swift MFE.

The Exchange also deployed an MFE to support the Texas Guard in Corpus Christi. It was up and running Sept. 2.

“We’re not your average retailer,” said Lt. Col. Jose Hernandez, an Exchange logistics officer who helped set up  the MFE in Corpus Christi. “We’re here to serve those who are stuck.” 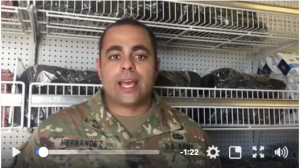 The MFE provided favorite snacks as well as clean socks for the more than 100 National Guard troops helping with the after effects of Harvey.

Because of the Houston flood water, Ellington Field Branch Manager Silvia Durham and Shift Manager Carmen McWashington were unable to travel to the Exchange to open the doors. Base Commander Col. Gary Jones requested the pair be picked up by a high water vehicle from their homes. They were able to open the Exchange in the afternoon on Aug. 29. When they arrived they found the only issue with the store was the freezer went down and the frozen food had spoiled. All the associates were safe and accounted for and the only one whose home suffered significant damage was Shift Manager Chris Hester. McWashington also had roof damage that caused some water to enter her home. Ellington Field Command proved how much our service and support means to those who serve. 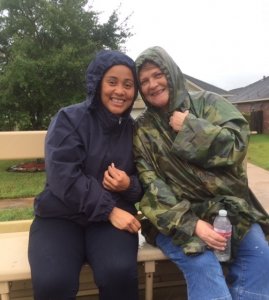 Ellington Field Branch Manager Silvia Durham and Shift Manager Carmen McWashington are picked up by troops so they can open the Exchange.

As recovery efforts continue, the Exchange is working with our managers and associates on the ground, contingency personnel and Texas State Guard leaders to ensure we are assisting in every way possible.

At the same time, the Exchange ramped up preparations at our Puerto Rico and Florida locations ahead of the latest threat, Hurricane Irma. After Irma skirted the island of Puerto Rico Sept. 6, the dedicated associates at Fort Buchanan had gas stations and some food concessions such as Starbucks open and ready to serve customers by mid-morning Sept 7. More information about those efforts will be coming soon.

The Exchange has supported disaster relief efforts ranging from earthquakes to tornadoes for more than 60 years. From Hurricane Camille in 1969 through the 2005 killer hurricanes Katrina and Rita, associates staffed mobile field exchanges providing basic necessities to National Guard members. We serve those who serve whether in conflict or disaster relief—we go where they go.