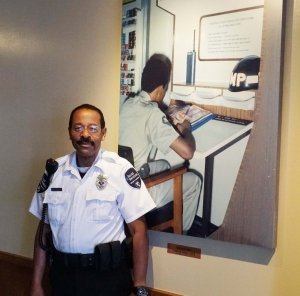 DALLAS – As a military police officer at the PX in Bangkok, Thailand in 1973-75, Jack Wrightsil never thought he would one day work at the Exchange headquarters, much less appear in one of the pictures hanging in its museum.

In the picture, a young Wrightsil, as an Army specialist E-4, is shown sitting at a table looking through an Exchange catalog at the military installation in Thailand.

Today, Wrightsil is a security officer on the weekends at the Exchange HQ.

“When I came to work at headquarters in 2006, I would walk around the building and walk past the picture a countless number of times,” said Wrightsil, who served in the Army for 21 years and worked at the Pentagon after becoming a civilian.

“One day, I went home and looked at other pictures I have of me from that period, wearing the same uniform. I was the only African-American MP at that installation, so I thought, ‘That’s me in the picture!’”