Taking Care of Cadets is Her Passion 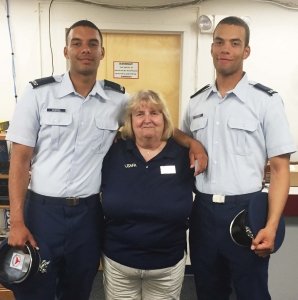 Logistics Assistant Bonnie Bonnin stands with some of her cadets.

USAF Academy Logistics Assistant Bonnie Bonnin has more than 40 years of service with the Exchange. A true definition of family serving family, Bonnin started her career at K. I. Sawyer AFB in Michigan. Six months later she transferred to the MCS where she ended up at the academy in 1982 and became a cadet sponsor in 1989. She has sponsored more than 70 cadets since then. Bonnin explains what compelled her to become a sponsor:

“I had younger kids and I wanted my kids to have a role model. And just the enjoyment of knowing that they’re going to have a home away from home.” Bonnin said.

Bonnin has an open-door policy.  The cadets mainly visit on weekends; they eat, watch TV, do homework, laundry, and are welcome to come and go, providing a sense of home. Waves of emotions are experienced during time at the academy. At such a young age, some are experiencing being away from their family for the first time. Cadets are in a new space, and different, more aggressive environment. Bonnin not only sponsors cadets at home, she also makes herself available to the young men and women at the MCS for socializing, a shoulder to cry on or an ear to listen to them.

“Working here and knowing quite a few of them (cadets), they know they can talk to me. This is basic training. When they are having a bad day, they come to me and see a smiling face.”

Bonnin was recently coined by Director/CEO Tom Shull for her service and continued involvement as cadet sponsors.

“It’s an honor and a privilege getting to know these young men and women, and their parents are so appreciative,” Bonnin said.