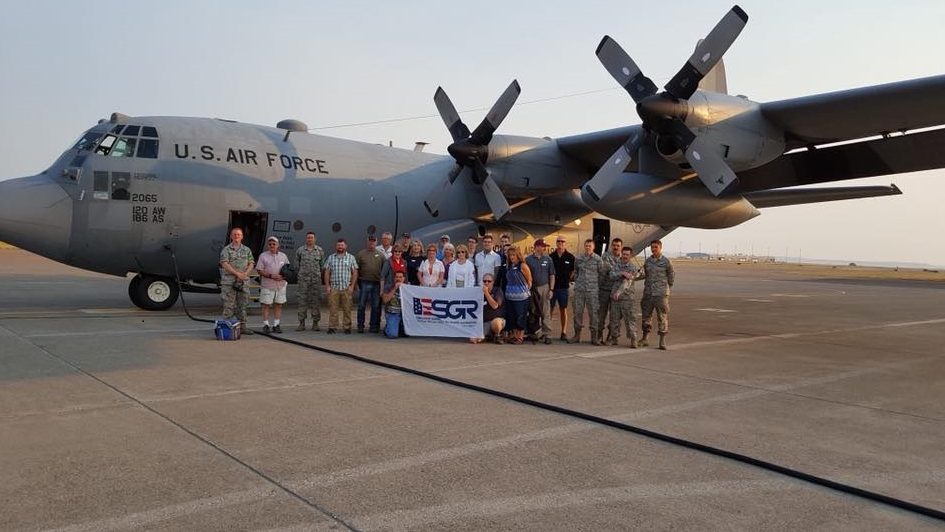 Wanda Cummins and 24 other “bosses” pose in front of the C-130 plane that took them on an excursion over Central Montana.

GORE HILL ANGB, Mont. – Wanda Cummins, Exchange annex supervisor at Montana’s Gore Hill Air National Guard Base, was honored Aug. 11 for her exemplary support of the Guard and Reserves. She was selected for the Employer Support of the Guard and Reserve Boss Lift flight aboard a C-130 airplane over central Montana. She also received a mission briefing and tour of the base.

She was among 25 employers—“bosses’’—who was selected to participate in the program to better understand the duties of their employees who serve in the National Guard or Reserves.

Cummins runs a small one-person troop store on Gore Hill in Great Falls, Mont. Although she’s not a “boss,” she was picked for the program because of her outstanding service to the Gore Hill base, said Kenneth Chorpenning, assistant manager of Malmstrom AFB’s Exchange, under which Gore Hill ANG base falls. 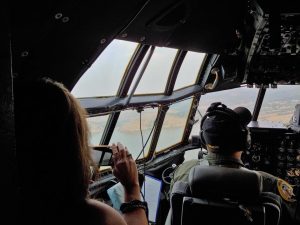 Wanda Cummins, Exchange manager at Gore Hill Air National Guard Base, snaps pictures out the window of the C-130.

Cummins said she was honored to be chosen as a program participant.

“I am honored to serve those who serve and really felt appreciated by being asked to join the Boss Lift,” she said. “It was a very special day being with the members of the Guard who I serve most every day.”

The “boss lift” was hosted by the Montana National Guard’s 120th Airlift Wing.

The Exchange is committed to the bylaws of ESGR support for Guard and Reserve associates who are called to active duty, guaranteeing to hold their jobs until they return.

“These troops are unique from active duty troops in that they are also have civilian employers,” Chorpenning said. “The Boss Lift program aims to give employers a view of what their employees do when the employees are away from work on Guard or Reserve duty.”