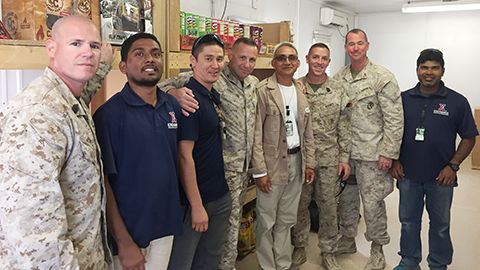 At Tip of the Spear: New Exchange Serves Marines at Isolated Afghan Camp 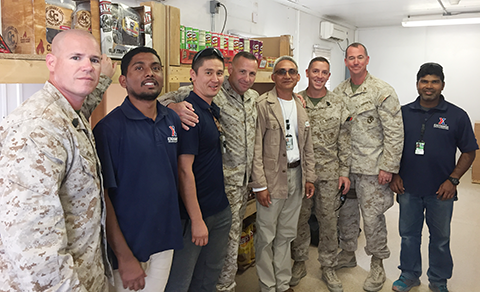 COL John Armellino, commander of the 8th Marine Regiment, center, and his leaders pose with associates of the new Exchange at Afghanistan’s Camp Shorab.

For the past year at Camp Shorab in Afghanistan, the 1,200 Marines have enjoyed rodeos like no other rodeo. Soon, they’ll enjoy their own Exchange.

Helicopters fly in merchandise—called a rodeo—to troops at the remote location and makeshift building and will continue to until the store’s grand opening Dec. 29. The festivities are expected to attract top U.S. military leaders in the Middle East.

COL John Armellino, commander of the 8th Marine Regiment, and his leaders “have nothing but praises for the Exchange,” said Robin Chetri, the Exchange’s general manager in Afghanistan. “He welcomed our staff to his small, closely knit family in a combat zone, promising them professionalism, friendliness and respect by every single member.”

From soap to special requests

Associates provide necessities, such as soap, shampoo, snacks and energy drinks, and take special requests for tactical eyewear. The stock assortment will grow once the new store opens.

“We do everything we can to provide a little taste of home,” Chetri said. “When I met Chief of Staff LTC Elizabeth Perez, she highlighted the vital part the Exchange plays, saying that without the Exchange, ‘If you’re out of soap, you’re out of soap.’ She had also mentioned that they look forward to our barbers/beauticians because females at the camp, including herself, have been cutting their own hair.”

The camp is still being developed, so associates bring their own linens and blankets and sleep in a tent with 100 bunk beds, living alongside the Marines and sharing their laundry, dining and other facilities. Chetri praised Exchange associates Nurdin Almazbekov, Kowsar Ahmed, Liz Childers, Jeff Jacob, Azat Mamraliev, Azamat Narbiev and Brandi Wallace for getting the operation moving.

Once opened, the camp will include a Popeyes, Green Beans coffee shop, Afghan tea shop and a concession bazaar. The installation, known as Camp Leatherneck and Camp Bastion during the height of Operation Enduring Freedom, sits 50 minutes from Kandahar Airfield via helicopter and more than 90 minutes by fixed-wing aircraft from Bagram AB.

Jason Rosenberg, senior vice president of the Exchange’s Europe/Southwest Asia Region, gave glowing reports about the Shorab operation. He said associates are engaged in the epitome of “combat retail.”

“Thank you to Robin and his awesome team for this opening in clearly one of the most austere and remote operating environments,” Rosenberg said. “I look forward to the full store and grand opening, but for now it’s great that the troops there have something.

“Robin and his team solved for ‘yes’ to get that much needed taste of home to the troops right away.”