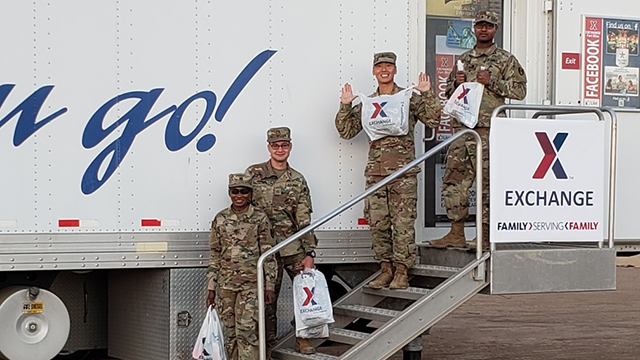 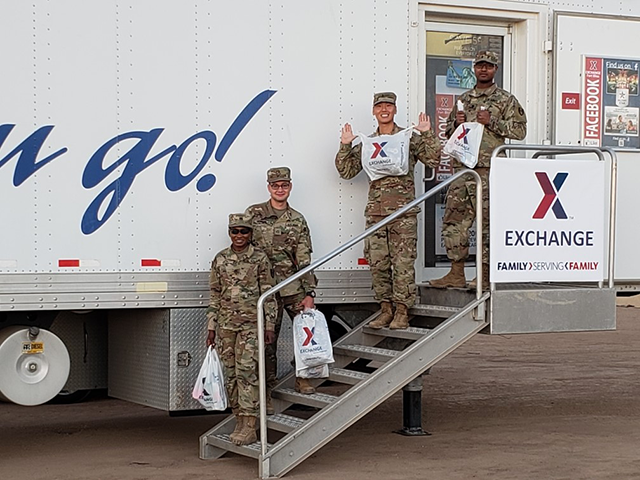 Soldiers come out of the mobile field exchange at Davis-Monthan AFB with sacks full of basic necessities.

DAVIS-MONTHAN AIR FORCE BASE, Ariz. – Continuing its 123-year-old mission of going where Soldiers and Airmen go, the Army & Air Force Exchange Service is doing its part to take care of the roughly 1,500 troops serving in border support operations.

“It’s an honor to be ready when the troops need us,” said Exchange Davis-Monthan General Manager Mikel Hunter. “The Exchange team lives for the troops—we are all in to serve them.”

‘Very thankful to the Exchange team’

Soldiers began arriving last week at Davis-Monthan, part of the U.S. mission to increase support near the border. The air force base is about an hour from the U.S. Southern border. 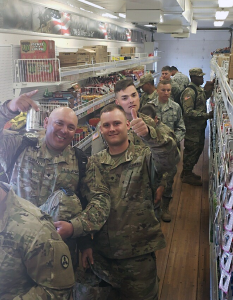 Soldiers deployed to Davis-Monthan AFB to support border operations shop at the Exchange’s MFE set up especially for them.

“The process was extremely simple. I put in the request for the MFE on Monday and by Thursday the store was up and running and serving the troops,” Newlin said. “We’re very thankful to the Exchange team for their hard work to provide this taste of home for the troops.”

An MFE is an “Exchange on wheels,” a 53-foot trailer stocked with emergency supplies, toiletries, snacks and drinks.

“We have all of these troops living in the tent city with the nearest Exchange about a 2- mile walk away,” Newlin said. “To be able to provide them with basic, but necessary items, is invaluable to support their mission.”

The Davis-Monthan MFE is the first to open to support troops that have deployed from Forts Hood, Bragg, Bliss, Campbell and Meade as well as Malmstrom and Beale AFBs. The rolling Exchange has been met with great appreciation.

“I was surprised, pleasantly, to see the Exchange had a store for us here,” said Cpl. Josh Thompson, who deployed to Davis-Monthan from Beale. “I’ve been in here every day and it’s nice to be able to buy stuff to help get through the day.”

A second MFE is set to open in Donna, Texas, to support troops in South Texas on Nov. 14. Both MFEs are scheduled to remain until the mission near the border is complete.