Custom Exchange Truck Wrap Thanks Veterans for ‘Service and Sacrifice’

When Exchange Creative Director Johnny Olson and his fellow Marines returned from serving in Operation Desert Storm in 1991, hundreds of people lined the streets to welcome them home, but it’s one person in particular that Olson remembers when he thinks of that day.

The welcoming crowd had become so large that the bus carrying Olson and his compatriots to their base had to stop. The bus driver, noticing a Vietnam Veteran in his uniform, opened the door and invited him in. The man stood at the front of the bus, tears in his eyes, and welcomed the troops home.

The contrast between the treatment this man and other Vietnam Veterans received on coming home and his own reception returning from the Gulf War struck Olson. A Veteran who had not received thanks for his service made time to thank the Marines on the bus that day.

“Ever since that day, I’ve gone out of my way to thank Vietnam Veterans for their service and give them a hearty ‘Welcome home,’” Olson said.

‘Thank you for your service and sacrifice’

Olson was thinking of that Marine when he designed the Exchange’s custom Vietnam Veteran truck wrap, with the assistance of Corporate Communication Specialist Mario Baltierra. The truck design is dedicated to Vietnam Veterans as part of the Exchange’s partnership with The United States of America Vietnam War Commemoration during the 50th anniversary of the war.

The design features an image from the National Archives of a young Vietnam Soldier while close-ups of names from the Vietnam War Memorial Wall can be seen in the background. Across the 53-foot trailer is the message “On behalf of a grateful Nation, thank you for your service and sacrifice.” 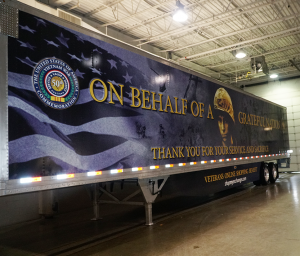 “I think it’s great because it lets everybody know who served that they were appreciated, said Eldon Ashley, a Facilities Management Office foreman at the Waco Distribution Center in Texas, who served in the Air Force four years active duty and 21 years in the Reserves. “That’s all I think everybody would want, to just be appreciated.”

Pat Thompson served in Vietnam during his four years in the Air Force and has spent the last 19 years working for the Exchange as a truck driver and mechanic. He noted that the new truck wraps show whom Exchange associates are really working for.

Watch for the trucks!

The design also displays an image of the Vietnam Veteran Lapel Pin, which Veterans can receive at their local Exchange during special ceremonies on March 29, National Vietnam War Veterans Day. The design is featured on three trucks, which will head to MacDill Air Force Base, Fla., Joint Base San Antonio, Texas, and Fort Carson, Colo., for the ceremonies.

The trucks will deliver merchandise from Exchange distribution centers in Dayton, Ohio; Waco; and Newport News, Va. It will also deliver its message of gratitude to Vietnam Veterans—the same message Olson heard from the Marine that day on the bus.

“He knew we needed to hear it because he and other Vietnam Veterans never heard it,” Olson said. “The design we created is my way of saying ‘Thank you.’”

To view pictures and read about how the Exchange served GIs during the Vietnam War, go to the Exchange History Flickr Album.