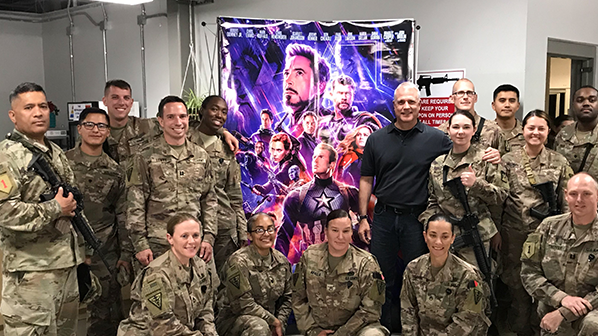 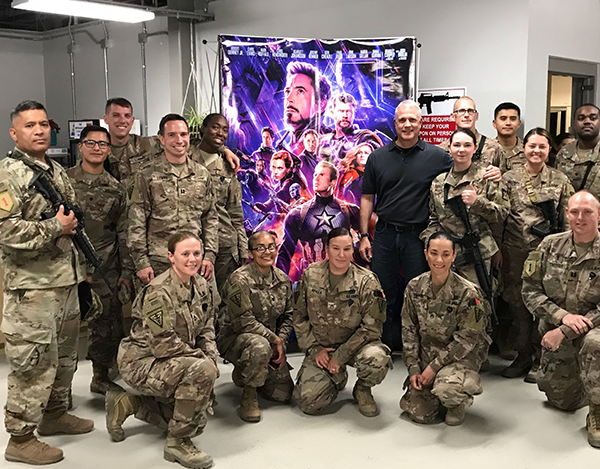 Thanks to a tweet from a military spouse of a deployed Airman, service members far from home joined a record number of moviegoers who have seen “Avengers: Endgame” as the Exchange and The Walt Disney Studios provided special screenings of the film in Afghanistan.

Kat Lancaster, wife of Maj. Joshua-Lee Lancaster, who is currently deployed, sent a tweet on April 27 to Bob Iger, The Disney Company Chairman and CEO, asking for the movie to be shown downrange. That same day, Iger tweeted back that the movie will be screened in Afghanistan, thanking Kat for the suggestion.

“I saw a tweet from Mr. Iger about the movie and felt compelled to speak up and ask if he could get it to the troops sooner than later,” said Lancaster. “I didn’t think it would get any traction, took a nap and when I woke up my phone was lit up like the 4th of July. This gesture exceeded any expectations I had. I’ve been a lifelong Disney fan and will continue to be knowing that they support our military families near and far.”

“Avengers: Endgame,” which set an opening weekend box office record of $1.2 billion, was deployed to Bagram on May 1 and 2, and to Kandahar on May 3 and 4, continuing the Exchange’s longstanding commitment to bring first-run movies to troops deployed overseas.

“Providing the brave men and women serving downrange with first-class entertainment offers a much-needed break from the often austere conditions they are serving in.”

“We’re thrilled to be able to do something special for our troops in Afghanistan, to boost morale and show our gratitude for their service,” said Robert A. Iger, Chairman and Chief Executive Officer, The Walt Disney Company.  “I’m grateful to Kat Lancaster for the great suggestion, and to the Army & Air Force Exchange Service for helping us make this happen.”

The Walt Disney Company is no stranger to downrange screenings as they provided first run “Star Wars” screenings to the troops in 2015, ’16 and ’17.

“Providing the brave men and women serving downrange with first-class entertainment offers a much-needed break from the often austere conditions they are serving in,” said Exchange Director/CEO Tom Shull. “Thanks to our partnership with Disney, we were able to provide our Warfighters with this all-important morale booster.”