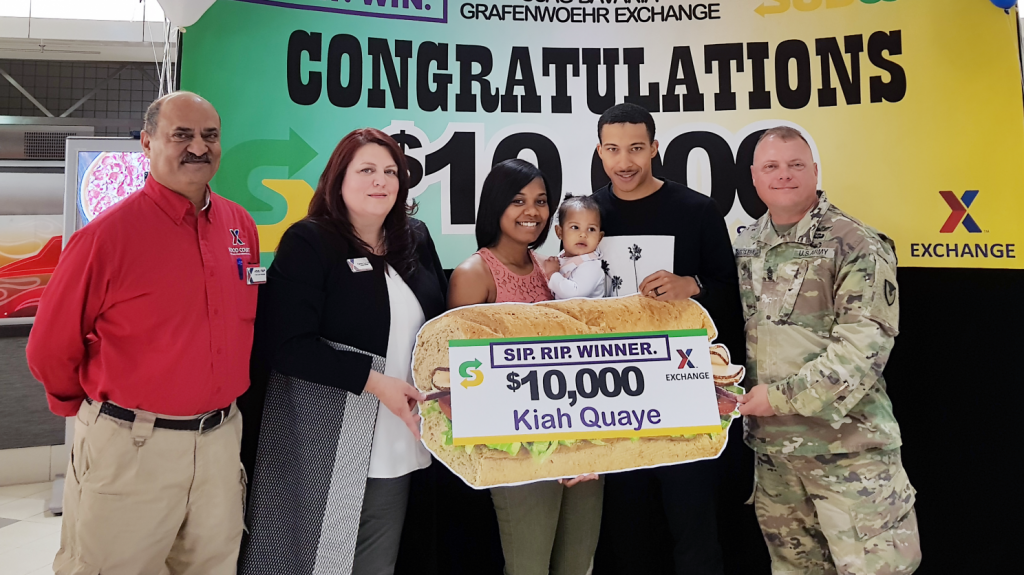 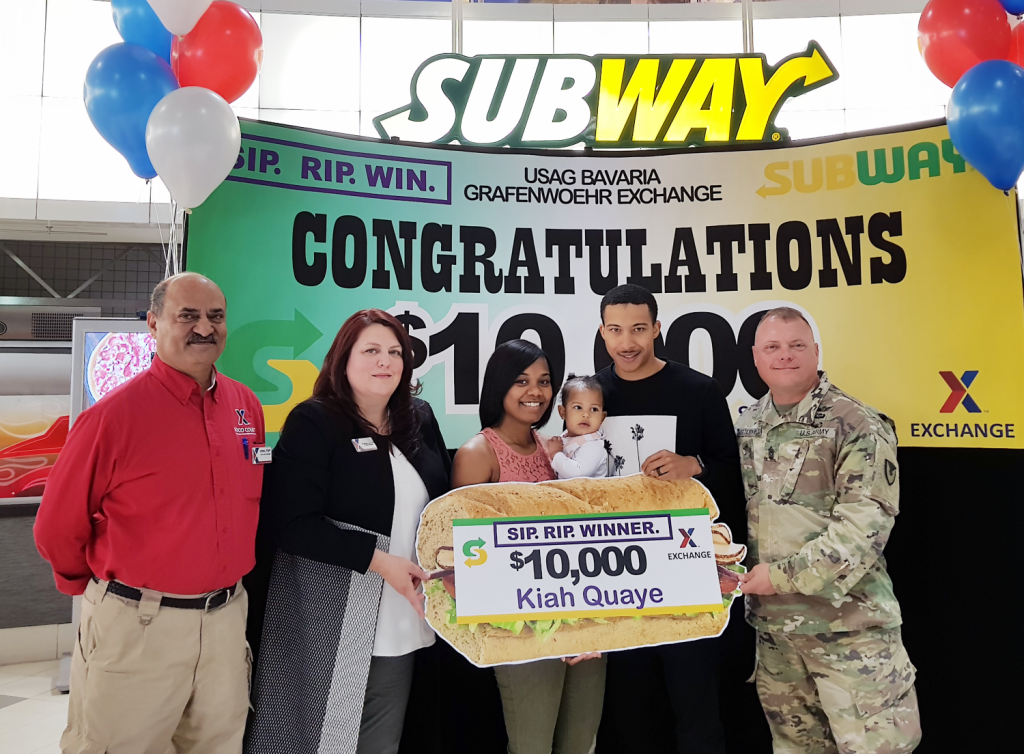 U.S. ARMY GARRISON BAVARIA, Germany – Army spouse Kiah Quaye wanted a quick, healthy lunch for her family after shopping at the Exchange in Grafenwoehr, Germany. She had no idea her large drink would change her life.

Her husband, Spc. Damion Quaye, an Army intelligence analyst in the 1st Squadron of the 91st Cavalry Regiment, showed her the Sip. Rip. Win. sweepstakes prize tab on her Subway cup. When she peeled it back, she couldn’t believe she had won a $10,000 Exchange shopping spree.

“I didn’t even know there was something on the cup,” said Quaye, who served in the Army as a specialist. “We were shocked.”

Quaye was honored during a celebration at the Grafenwoehr food court May 17. Exchange General Manager Carrie Cammel and U.S. Army Garrison Bavaria Command Sgt. Maj. Micheal Sutterfield congratulated Quaye as they presented her with her winnings.

The Subway Sip. Rip. Win. sweepstakes ran from Jan. 24 to May 15 at overseas Exchanges.

Shoppers can redeem their winnings through May 20. The grand prize, a $25,000 Exchange shopping spree, has not yet been claimed.

A fifth was redeemed at an installation in Okinawa, Japan, and a sixth was awarded at Camp Humphreys.

More than 75,000 other prizes, ranging from a $1,000 Exchange gift card to a free Subway cookie, were also up from grabs.

The Quayes met while serving in the same company of the 1st Cavalry Division in Fort Hood, Texas—she is from Cleveland, and he is from Baltimore. Quaye separated from the Army in 2017 and says her military experience helps her cope with the challenges of being a military spouse.

“Being in Germany away from family and having to adjust to a new culture have been difficult,” Quaye said. “But I’m more understanding because I used to be in the military, too.”

They have been in Grafenwoehr for two years and appreciate how the Exchange has been there for them, especially since their daughter was born last July.

“The Exchange has what we need,” Quaye said. “Diapers, cleaning supplies, electronics—we prefer to buy from the Exchange rather than on the economy.”

Quaye plans to use most of her shopping spree funds on essentials.

“We’ll buy diapers and everyday little things we always spend money on at the Exchange,” she said.

However, she is considering one big splurge.