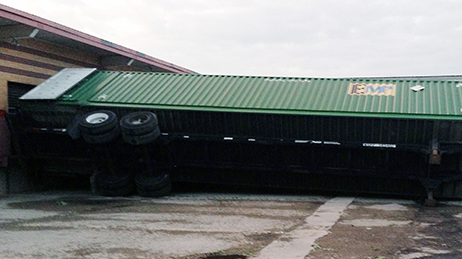 A trailer at the Exchange’s Dayton Switch Point rests on another after a tornado blew it over late May 27. The twister was one of several that pounded the city and strung downed power lines across roads used by Exchange truckers. The Exchange at Wright-Patterson AFB, also in Dayton, escaped damage. There were no injuries to associates at the Switch Point or Exchange, although some of their homes suffered damage, said Fleet Operations Manager Richard Silvis. “We had only one late delivery today,” he said. “The folks there in Dayton are just that good.”