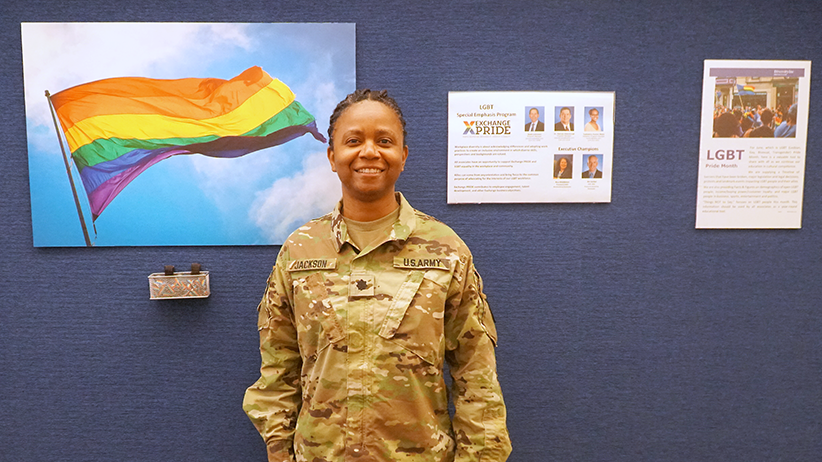 A Soldier’s Life: The Challenges and Triumphs of LGBT Service Members 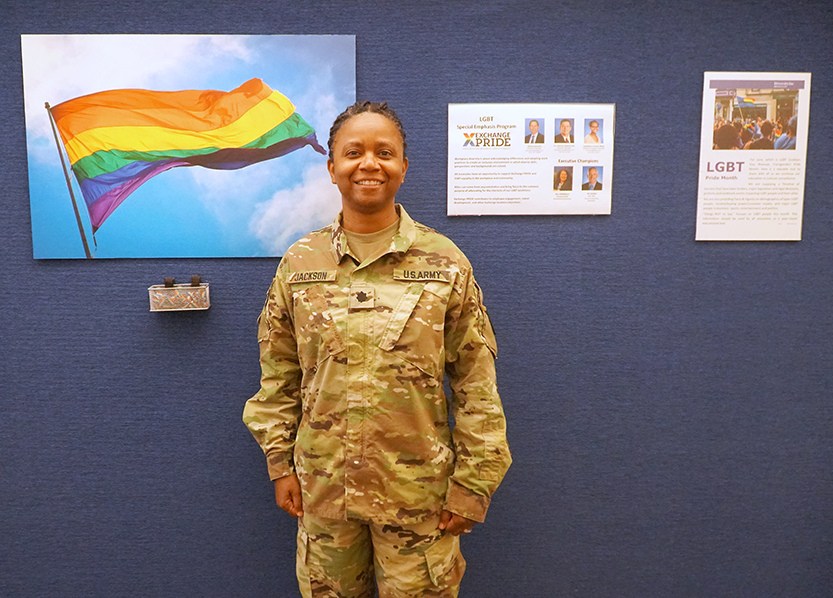 LTC. Alicia Jackson wants fellow associates to understand the struggles of being LGBT while serving in the military, particularly through the policy changes during the last 25 years.

LTC. Alicia Jackson knows what it means to struggle in silence—and come out on top.

Jackson shared the history of military policies affecting lesbian, gay, bisexual and transgender (LGBT) service members and how they have influenced her journey as a Soldier in a Lunch and Learn presentation June 12 at headquarters in Dallas. The Exchange’s PRIDE special emphasis group hosted the presentation in honor of Pride Month.

Jackson wants her fellow associates to understand the struggles of being LGBT while serving, particularly through the policy changes that have been made over the last 25 years.

Jackson, who grew up in Washington D.C., describes her childhood as being free from labels. It wasn’t until she was a junior in high school that she realized her attraction to both men and women had a name—and came with risk.

“I had no example of girls liking girls growing up,” Jackson said. “Over the years, I began to develop a better understanding of what that was—and, unfortunately also develop an understanding that you have to keep it to yourself.”

Jackson PCS’d to the Exchange in 2018, where she serves as a Logistics officer. Upon her arrival, Jackson immediately recognized the Exchange for its efforts to be inclusive.

“I was on the third floor and passed the EEODI office, which featured posters for different groups including PRIDE,” Jackson said. “I thought, ‘Wow, what a difference.’ It just warms my heart to know that this organization embraces diversity.”

A history of two worlds

Jackson began serving in 1991, just two years before the signing of “Don’t Ask, Don’t Tell.” This policy allowed lesbian, gay and bisexual Americans to serve in the military as long as they kept their sexual identity private.

“It just warms my heart to know that this organization embraces diversity.”

In the early years of her service, Jackson received advice that guided the next 20 years.

“When you show up for PT at 5 a.m., it’s all business,” Jackson said. “When you leave at 5 p.m., it’s all personal. Never mix the two worlds. That is the best advice I could have received at that time.”

This mind-set led to career success for Jackson, who deployed in support of Operation Continue Hope in Somalia, Operation Iraqi Freedom and Operation Enduring Freedom in Afghanistan.

She has served in various levels of command and staff positions, including Platoon Leader, Company and Battalion Commander, and Inspector General. Her assignments include Fort Benning, Fort Bragg, South Korea, Germany and, most recently, Turkey.

In 2010, the tides began to change for LGBT service members when Don’t Ask, Don’t Tell was repealed.

Then a Battalion Commander, Jackson and those in her circle decided not to live openly after the repeal, if only because they couldn’t know the repeal would stick.

However, in 2013, the Department of Defense extended benefits to spouses and dependents of lesbian, gay and bisexual service members, which Jackson said was a game changer.

“Now, not only can we serve openly, we are legally allowed to marry and have those marriages be recognized,” Jackson said. “We can get the same benefits extended to traditional marriages.”

In light of this change in policy, Jackson married her wife, English, in 2014. When she PCS’d to Shaw Air Force Base the following year, Jackson was able to bring her family with her and provide them access to healthcare for the first time.

While there have been hurdles for Jackson and her wife, they have mostly been able to live together, openly, as a family while Jackson serves her country.

Jackson credits the Exchange for being able to embrace and express herself today.

“This is the first time I have been OK and comfortable with being out and open,” Jackson said. “Thank you for that.”