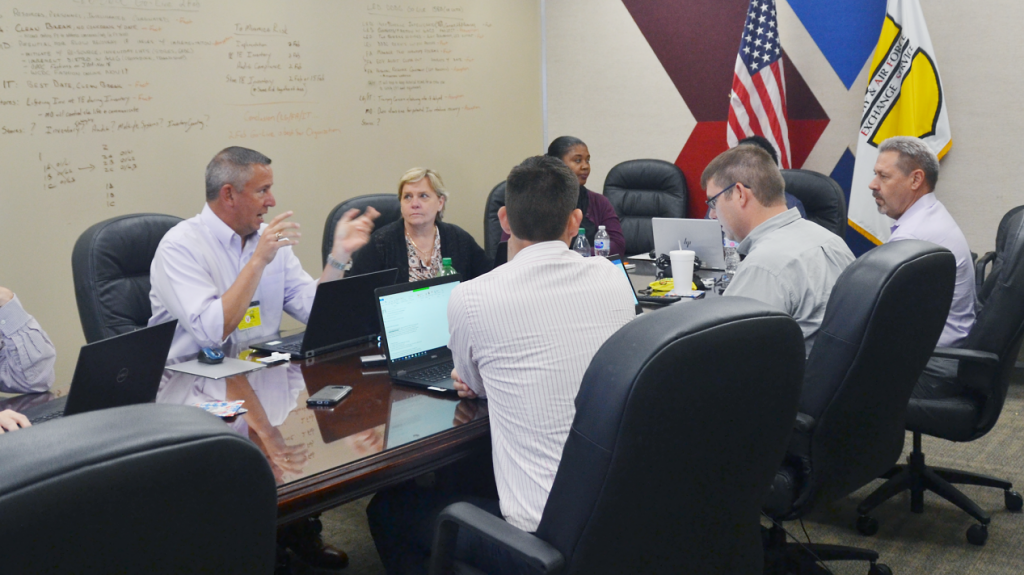 LG Takes the Next Step in Testing Shipping System for DoD

The USTRANSCOM team and Exchange’s transportation management experts talk about fine points of getting shipments overseas to their destinations.

The Exchange logistics team is taking the next step in testing an OCONUS transportation management system (TMS) for U.S. Transportation Command with shipments to Okinawa, Japan.

USTRANSCOM, on behalf of the Department of Defense, is conducting a 24-month assessment of the TMS prototype.

“The ability to rapidly design, test, implement and now expand is a true testament of our prototype partners at the Exchange,” said Andy Dawson, USTRANSCOM’s TMS team lead at their Scott AFB, Ill., headquarters. “We’re excited to be expanding to Japan.”

This next step in testing the prototype, taking place this week, will add more complexity with multiple shipping lanes, additional carriers and customs clearance.

So far, USTRANSCOM’s partnership with LG has been fruitful in testing the future of DOD’s transportation systems.

“A prototype is all about discovery,” Dawson said. “The Exchange is helping us collect the information we need to make an informed decision on if, and how, to move forward with the implementation of the prototype.”

The goal of a TMS is to provide DOD with increased visibility, booking, shipping and tracking cargo in a single system.  DOD uses a global network of nodes that includes aerial ports, seaports, distribution hubs and staging bases. These nodes are not currently linked.

A TMS would provide a common platform to globally integrate the transportation enterprise.

“The prototype helps the Exchange to make sure our cargo gets moved on time to support Soldiers and Airmen in overseas locations,” said Morgan Meeks, Exchange vice president of transportation operations. “Taking this to Okinawa is a big step in serving our shoppers.”

LG leaders also hope the system will help drive down supply chain costs, an Exchange strategic priority for 2019. Second-destination transportation overseas composes the bulk of the Exchange’s use of appropriated funds. The prototype’s increased visibility could help lower such costs.