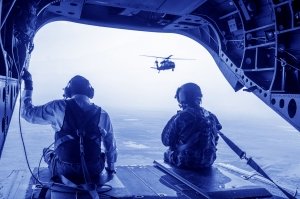 Director/CEO Tom Shull, left, looks over the landscape from the back of a chopper.

Happy New Year! It’s hard to believe just a few short months ago, we were celebrating our 120th anniversary in the heat of summer.

With our biggest shopping season just wrapped up, our thoughts turn to preparing for the annual inventory and then focusing on our initiatives and priorities for the 2016 retail year, which starts in February.

Before Thanksgiving, Chief Master Sgt. Sean Applegate, the Exchange’s senior enlisted advisor, and I visited Exchange facilities throughout Southwest Asia. The Exchange operates stores in Kuwait, the United Arab Emirates, Qatar and, once again, in Iraq.

The chief and I visited eight stores in three countries in four days—it was quite a trip. (You can see photos from the trip on the Exchange associate Flickr site.)

Although the visit was short, it was important to see firsthand the associates who are serving customers so far from home.

To those active and retired associates who have deployed, I say, ‘Awesome job!’ You represent what the Exchange means to Soldiers, Airmen and their families by bringing them a touch of home away from home.

It was inspiring to meet some of the 600 associates who voluntarily leave the comforts of their own homes and families to provide support to those who are serving away from their own homes as well.

Operating stores for deployed troops is one of the factors that helps distinguish the Exchange as a military retailer.

Serving our uniformed customers in austere conditions, our associates downrange have a stunning impact on the lives of deployed Soldiers, Sailors, Marines and Airmen.

You can be proud of what your fellow associates do downrange to bring a small taste of home to our troops.

‘So many dedicated associates’ 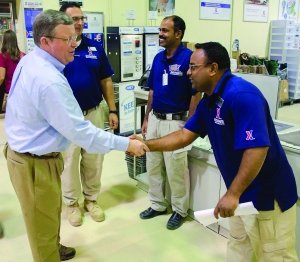 During his trip to Southwest Asia just before Thanksgiving, Director/CEO Tom Shull met local and third-country nationals who are integral to Exchange operations.

I was impressed with the stock rates, inventory management and how many stores looked like our stores back in the States. It warmed my heart to see so many dedicated associates, local nationals and third-country nationals supporting our troops.

You represent what the Exchange means to Soldiers, Airmen and their families by bringing them a touch of home away from home.

Voice, face of  the Exchange

As we ready for inventory and close the books on 2015, I want to thank the associates serving on the front lines worldwide. Whether you are a sales clerk in California, a cashier in Kuwait or a call-center representative in Texas, you are the voice and face of the Exchange.

I recognize the long hours the holiday shopping season means. 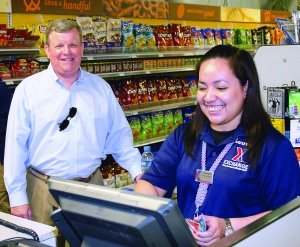 Associate Charmaine Dagatan at Coalition Compound Tent store rings up Tom Shull, who bought a bottle of water with his MILITARY STAR card.

A new year, lots more to do

The Exchange has had a successful 2015. I look forward to sharing the full results with you when they are available.

The team has accomplished much in 2015, and there is more to do in 2016 as the Exchange continues to improve how we serve Soldiers, Airmen and their families. 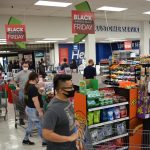 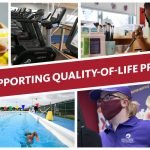