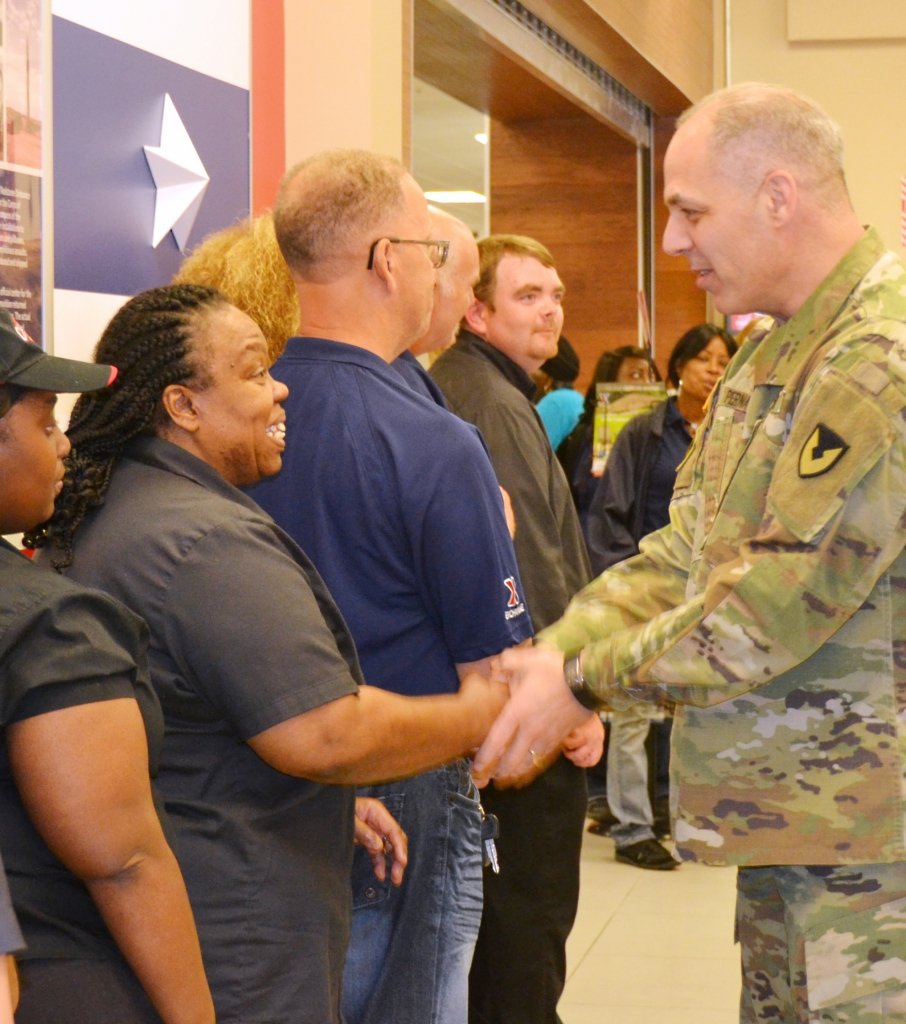 The four-star general gave challenge coins to several associates during an April 18 presentation. Perna shook hands with and congratulated associates by name, showing appreciation for their dedication to excellence.

“I wish I had time to recognize the entire team because what all of you do is truly about taking care of Soldiers and families,” Perna said. “You are a great team, and I am very grateful for what you do.”

Not long after he arrived as AMC commander in late 2016, Perna met Express associate Beatrix Rivera. He was wearing civilian clothes—so Rivera wasn’t aware she was serving a four-star general. Her can-do attitude impressed him so much that when Exchange Director/CEO Tom Shull reached out to coordinate a face-to-face meeting with Perna, he suggested they partner to recognize the work of several Redstone Exchange associates.

Perna understands the importance of the Exchange, having served on the Exchange Board of Directors from January 2015 to September 2016, including about a year as board chairman. Shull was so moved by the four-star general’s willingness to acknowledge the contribution of Exchange associates at Redstone that he presented Perna with a POG plaque.

“GEN Perna is a Soldier’s Soldier,” Shull said. “He’s a lead tank—he sets the example and raises the bar for all who know him. The Exchange deeply appreciates GEN Perna’s leadership, and we are privileged to have him here to thank our Redstone associates in person. It’s a true honor!”

Exchange Central Region East Vice President Paula Gunderson said Perna’s recognition of the Redstone team will leave a lasting impact. Redstone associates were elated, and many shared photos of the coin and the recognition on their social media accounts, receiving positive reaction and phone calls from family and friends.

“GEN Perna’s comments resonated with all of our team members,” Gunderson said. “I’ve heard many say, ‘Even a four-star general truly appreciates what we do each and every day.’