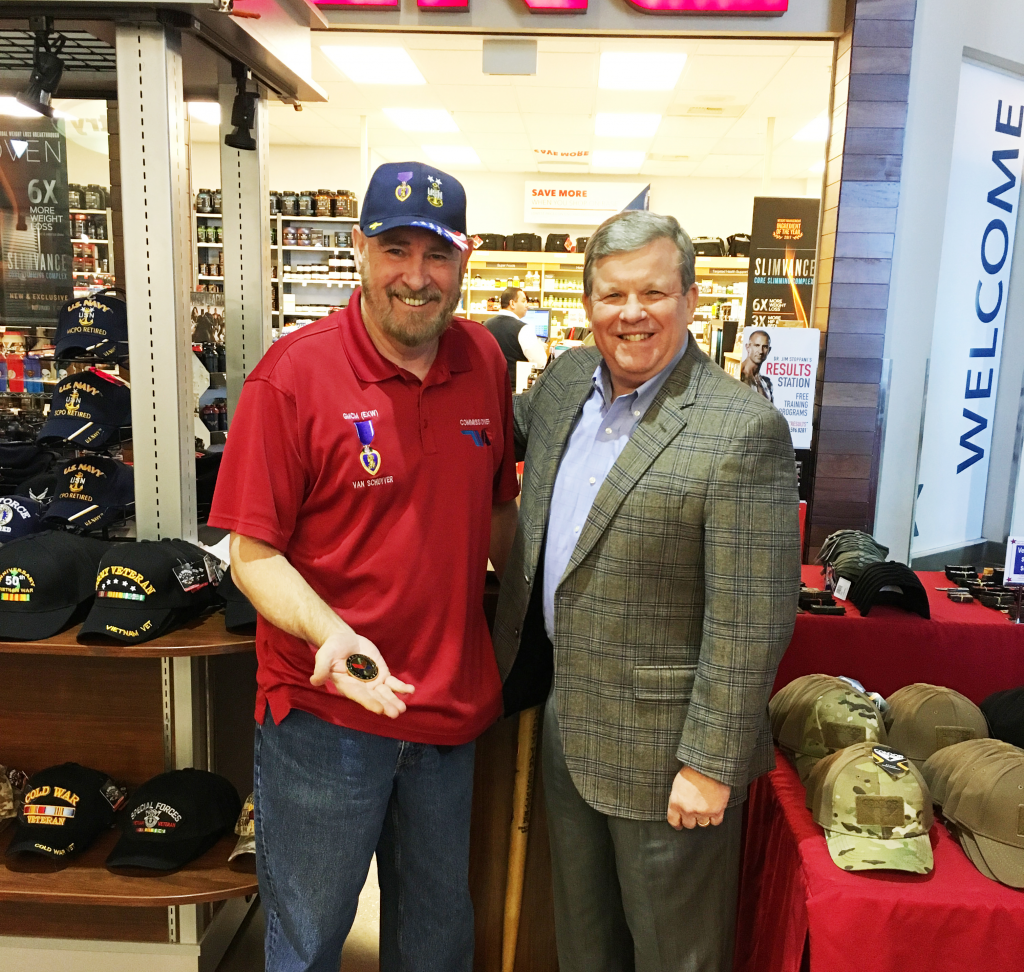 At the Tinker Exchange, Concessionaire is All In For Helping Fellow Disabled Veterans 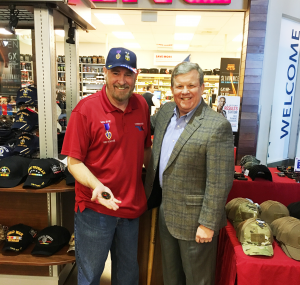 At the Exchange, 85 percent of associates have a connection to the military. The Exchange has hired 1,000 Wounded Warriors since 2010—second only to the Army.

Known to the Tinker community simply as “Master Chief,” the 64-year-old Van Schuyver designs his own T-shirts. All labor, from printing shirts to running the booth, is done voluntarily by fellow disabled Veterans in the Oklahoma City area.

He and his volunteers have built wheelchair ramps, paid for car repairs, repaired damaged roofs and more. During the holidays, he and his team donated nearly 320 meal baskets to needy
Veteran families.

“Chief Larry is a treasure. His dedication to the Veteran community is truly remarkable, and we are honored to have him as a member of our Exchange family.”

“Chief Larry is a treasure,” Hyland said. “His dedication to the Veteran community is truly remarkable, and we are honored to have him as a member of our Exchange family.”

Van Schuyver enlisted in the Navy in 1973. He transitioned to Reserve in 1983 and was called back to active duty shortly after 9/11. He received a Purple Heart in 2005 after suffering a traumatic brain injury in Iraq. In 2009, during his second deployment to the country, he was in the path of an explosion, resulting in the placement of a metal rod between his knee and ankle.

His refusal to let his injuries limit his aspirations lies at the core of his outreach to disabled Veterans, and he encourages them to rise above their circumstances.

Two booths down from Van Schuyver’s, Alan Taylor operates 2 Sisters & An Angel, selling blankets, sheets and military memorabilia. Taylor, also a disabled Navy Veteran, said Van Schuyver not only guided him through the process of applying for Veterans benefits but also showed him the ropes of working with the Exchange.

“He’s helped us emotionally, physically and mentally,” Taylor said. “He would give you the shirt off of his back.”

In 2014, Van Schuyver’s passion for Veterans led Oklahoma Gov. Mary Fallin to appoint him to the Oklahoma Veterans Commission. As a commissioner, Van Schuyver works with military groups across Oklahoma to help Veterans
get benefits.

Looking back on his whirlwind eight-year journey at the Exchange, Van Schuyver said he could not have imagined his business would touch so many lives—in 2017 alone, he said, Sittin’ Pretty USA gave $108,000 to help disabled Veterans.