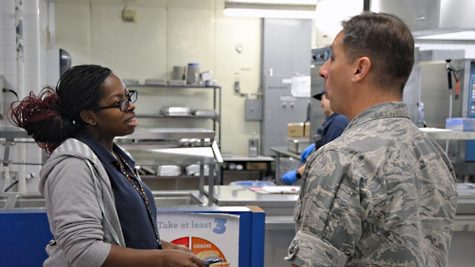 For Pacific School Cafeteria Foreman, Working at Exchange is a No-Brainer 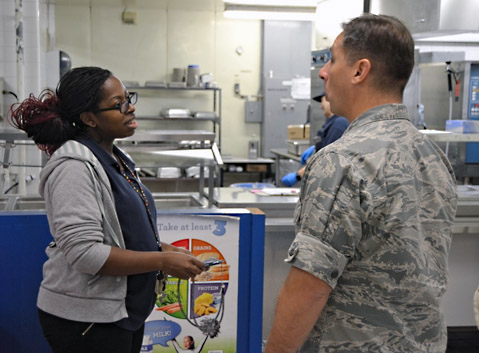 KADENA AB, Japan – From making tacos to supervising cooks at a school cafeteria, Summer Turner said she’s the epitome of  “Family Serving Family.” For her, coming to work at the Exchange eight years ago was a no-brainer.

“I grew up as a military brat, so the environments of the Exchange and commissary were very common for me, so when I decided to start working, applying for a position with the Exchange would be a good fit,” said Turner, cafeteria foreman at Kadena AB’s Amelia Earhart Intermediate School on Okinawa, Japan. “I also felt that it was an environment in which I would be comfortable, grow and learn.

“My situation fits with Family Serving Family because I have been able to give back to the military community by ensuring that their kids receive great, nutritious meals every day. I grew up primarily on military bases, so it feels great that I am helping serve our military members and their families just as I was helped when growing up.”

Exchange runs in the family

For Turner, working at the Exchange is all in the family.

Her father, Malcolm Turner, a retired Air Force chief master sergeant, is a PowerZone supervisor at Kadena’s Exchange; sister, Ciera Morgan, is an HR assistant at Camp Foster’s Exchange; brother Tai is assistant manager at Kadena’s Olympic Dunkin’ Donuts and Baskin-Robbins. An uncle served in the Navy; another uncle in the Army.

“My situation fits with Family Serving Family because I have been able to give back to the military community by ensuring that their kids receive great, nutritious meals every day.”
-Summer Turner

From Utah to Okinawa

Turner’s Exchange career began at Taco Bell at Hill AFB, Utah, where her father was assigned. From there, she worked a short stint at Luke AFB, Ariz., before becoming a Starbucks supervisor at Hawaii’s Schofield Barracks. She eventually moved to Okinawa, where she supervised Camp Foster’s  Dunkin’ Donuts and Baskin-Robbins, and then moved to Amelia Earhart’s cafeteria.

During the summers when school is closed, she works for Exchange restaurants at Camp Hansen and Camp Foster.

Her managers said Turner’s wit resonates with the kids at Amelia Earhardt so much that they talked her out of moving to another school.

“One of the students, who called me his ‘bestest friend,’ said, ‘Ms. Summer, if you leave, I’m going to be really sad and I can’t be your friend anymore,’ ” Turner said. “I have had such overwhelming support and love here by the staff at the school that they often jokingly tell me that I’m not allowed to leave.

“However, if I do move on, they will support me in whatever my next step with AAFES is.”