Happy 2019! Because of you, the Exchange has finished another extraordinary year of taking care of those who matter most—our Nation’s Warfighters and their families.

During 2018, the Exchange participated in Reform Management Group Task Force’s study of exchange-commissary consolidation. The discussion is ongoing, and we continue to participate in the process.

Throughout 2018, the Exchange’s commitment to lean forward and serve those who serve was on full display.

As Hurricane Florence threatened the Atlantic Coast in September, Logistics and Merchandising teams worked around the clock to ensure our stores on the East Coast had essentials that would be needed when the skies cleared. More than 4,000 packages of batteries, thousands of cases of water as well as generators, gas cans and flashlights were sent to Fort Bragg and Seymour Johnson AFB to help first responders and families trying to rebuild.

Hurricane Michael which ravaged Tyndall AFB this past October was a clear example of the unique capabilities the Exchange provides the military community. In a matter of days, our mobile field Exchange was open, stocked with emergency supplies and comfort items for relief workers.

Just days after Thanksgiving—and six weeks after Michael severely damaged our stores at Tyndall—our team reopened the main store to a stream of grateful shoppers. This monster hurricane had turned our associates’ lives upside-down. The team set aside personal hardships to get services up and running quickly, a clear sign that normalcy is returning to Tyndall.

Serving troops from Afghanistan to Poland to Korea to Texas

This past year, we continued to deliver on our promise of “We Go Where You Go.” When nearly 6,000 troops deployed near the border, the Exchange went with them.

MFEs at Davis-Monthan Air Force Base in Arizona and Base Camp Donna, Texas, arrived stocked with supplies, food and drinks. Both locations were also provided barbershops and food trucks.

We celebrated the holidays with heroes far from family and friends. In partnership with the Defense Commissary Agency, the Exchange delivered a taste of home to deployed service members overseas—frozen turkeys arrived in Qatar, Kuwait and Iraq just in time for Thanksgiving.

"From the Exchange’s agile response in times of disaster to the success of a new Service sports partnership, Exchange associates at every level of the organization gave their all to provide exemplary service to our Warfighters—past, present and future. Because of you, we had a terrific year and are poised to have an even better 2019."

This past August, the special connection we share with those serving at the tip of the spear was further strengthened when a rocket hit the Warrior Exchange at Bagram AB. The store was closed and, thankfully, no one was inside.

Workmen repair the roof of Bagram AB’s Warrior Exchange in Afghanistan after the building took a direct hit from a rocket.

In addition to structural damage, the attack destroyed cash registers, coolers and other equipment. Fifteen Airmen from the 1st Expeditionary Civil Engineer Group showed up with brooms and dustpans to help clean the mess left by the rocket and just two days later, the store reopened.

The Exchange remains engaged in Eastern Europe, supporting major exercises Anakonda 18 from April through November and Trident Juncture 18 from October through December in Norway. Our team in Poland expanded upon our critical support to troops deployed there, including barber and telecommunications services.

In the Pacific, the Exchange remains a major force multiplier as Camp Humphreys in South Korea continues to transform. In September, we cut the ribbon on a new mini mall near family housing, bringing greater convenience to more than 35,000 service members, families and civilians.

And, after 15 years of operating out of temporary locations, the Express at Camp Mujuk in South Korea relocated to a permanent store. The store is nearly three times larger than our former location and brings needed support to Marines there.

In addition to the exceptional work in the field, associates at headquarters consistently exceeded the needs of the Exchange. From accountants in Finance & Accounting to designers in Customer Experience to analysts in Information Technology and more, the Exchange achieved the success it has this year because of the efforts of every associate at every level and location.

2018 underscored our focus on recognizing the service of Warfighters, past, present and future as we celebrated the first anniversary of the Veterans online shopping benefit. In the program’s first year, more than 75,000 Veterans used their lifelong online military exchange shopping benefit and saved more than $4 million in sales tax.

Veterans have helped drive ShopMyExchange.com sales, which are up 9 percent vs. last year. 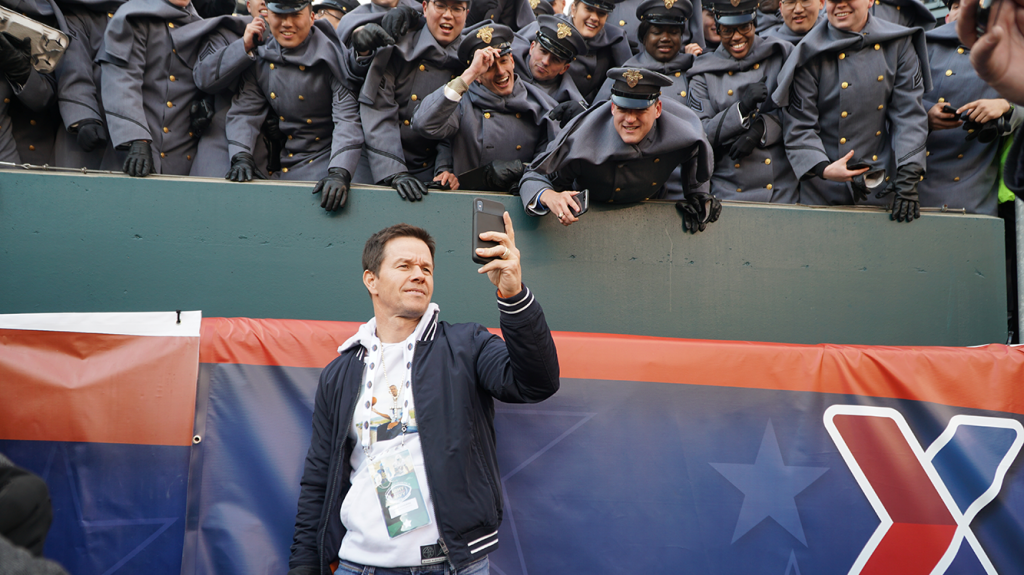 The Veterans online shopping benefit received national attention through a TV ad on CBS during the Army/Navy game. In the hour the ad aired, nearly 6,000 Veterans and traditional shoppers created profiles on ShopMyExchange.com. In total, more than 9,700 new customers signed up to shop through ShopMyExchange.com on game day, and Veteran shopping sales increased 36 percent over the same day in 2017.

We increased convenience, strengthened the benefit we provide authorized shoppers and did our part to improve readiness in 2018. BE FIT sales are increasing (we will know the full picture after the fiscal year ends), and we opened more than 20 restaurants, all with better-for-you choices, this past year.

Since MILITARY STAR was authorized for use at commissaries, more than 389,000 service members and families have realized the convenience of using one card for most of their on-installation purchases. From their $279 million in commissary purchases, cardholders have earned more than $5.6 million in rewards, and saved potentially $7 million in interest charges as compared to bank credit cards.

From the Exchange’s agile response in times of disaster to the success of a new Service sports partnership, Exchange associates at every level of the organization gave their all to provide exemplary service to our Warfighters—past, present and future. Because of you, we had a terrific year and are poised to have an even better 2019.

Thank you for your service to Warfighters and their families.

Check out these other highlights from 2018. 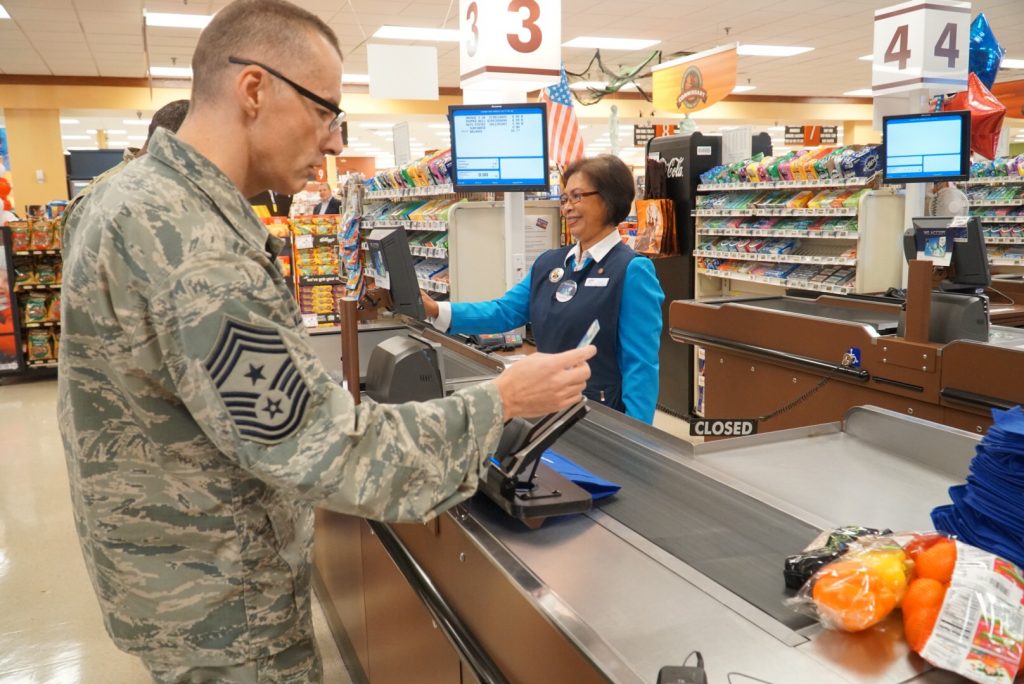 The Exchange Credit Program continued to intensify MILITARY STAR in 2018, completing the rollout of the card’s acceptance at all commissaries worldwide last November. 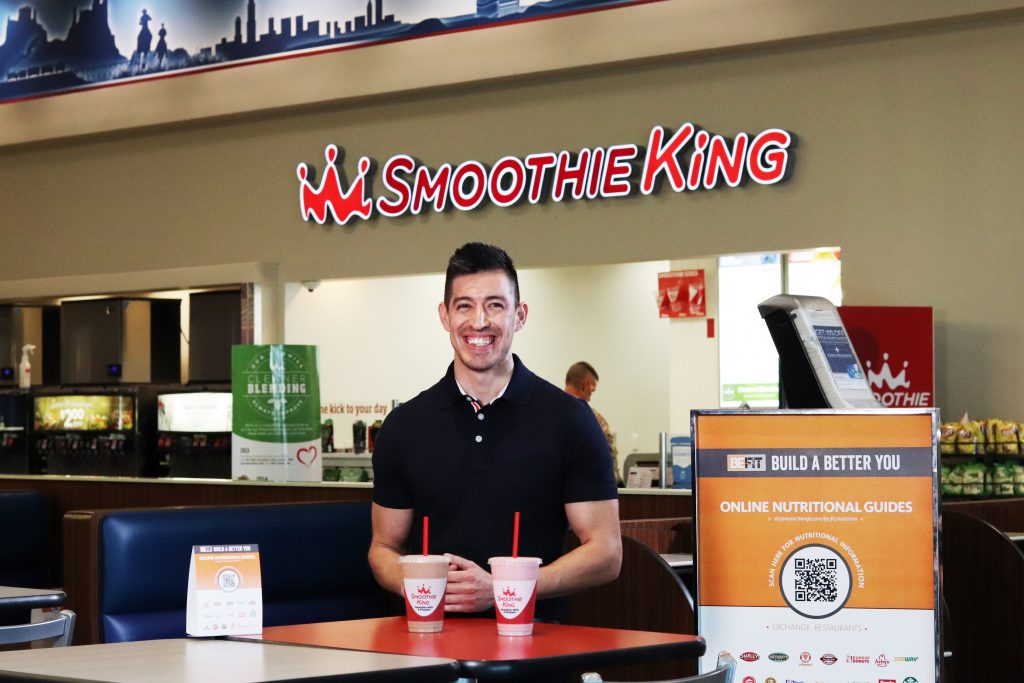 The Exchange is helping Soldiers, Airmen and their families take the guesswork out of eating on the go at food courts worldwide. Warfighters and families can visit the BE FIT section of the Exchange’s Hub page, ShopMyExchange.com/Community, to see nutrition videos from BE FIT ambassador Roy Montez, pictured. 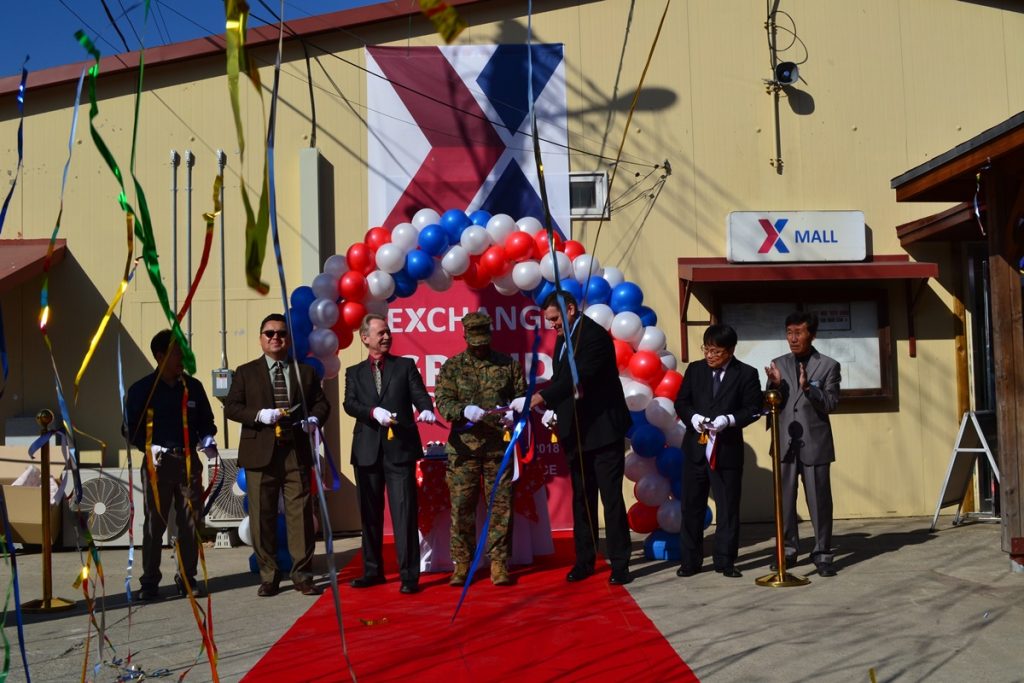 In South Korea, Camp Mujuk commanders joined Exchange leaders in cutting the ribbon on the new Express, which is nearly three times larger than its previous space and features an expanded product selection, including BE FIT healthy snacks, grab-and-go hot food, coffee and more. 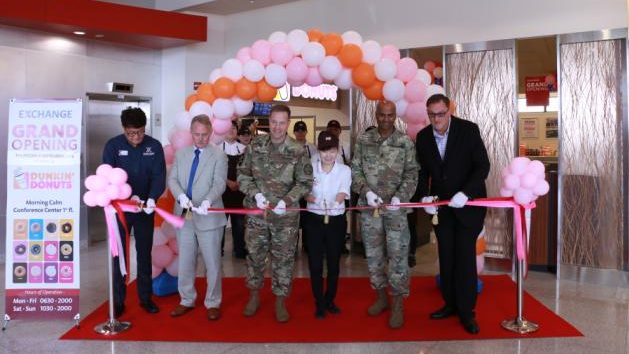 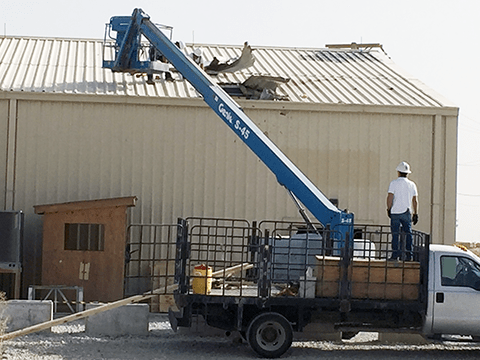 Workmen repair the roof of Bagram AB’s Warrior Exchange in Afghanistan after the building took a direct hit from a rocket.

The Exchange truck that appeared at the Army-Navy game Dec. 8. 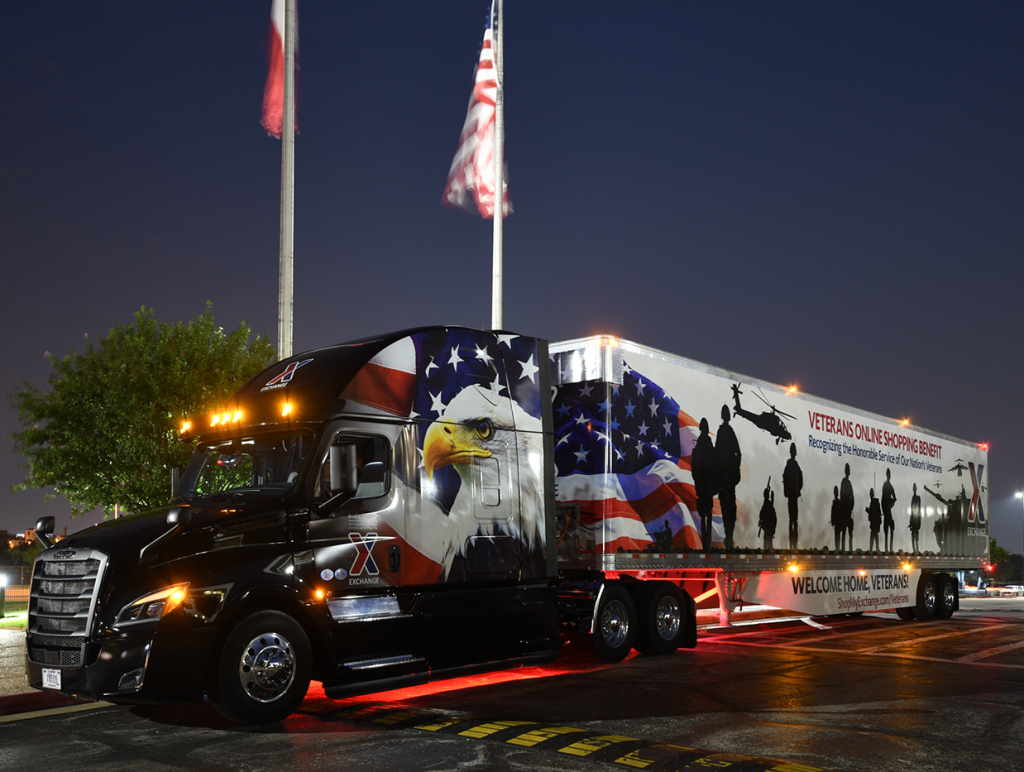 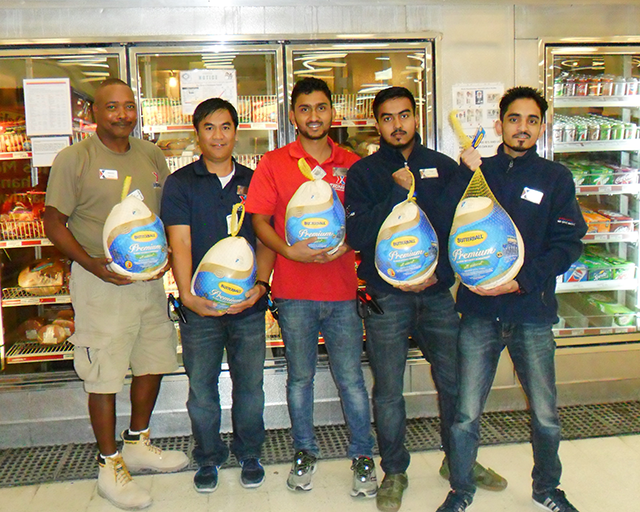 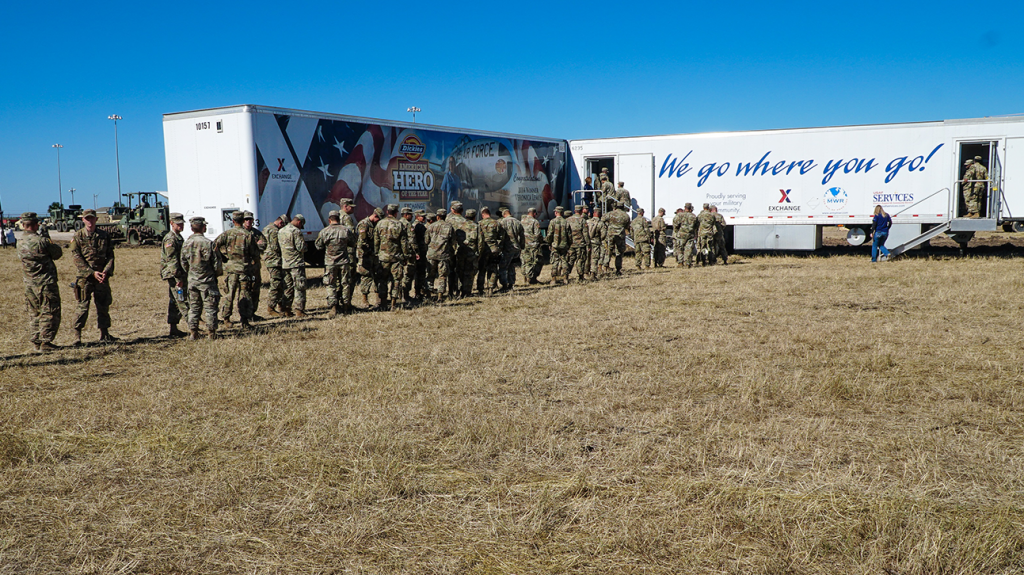 Installation command at Base Camp Donna outside of McAllen, Texas, requested a mobile field exchange on Nov. 10. Four days later, the store-on-wheels opened for a steady stream of Soldiers throughout the day. 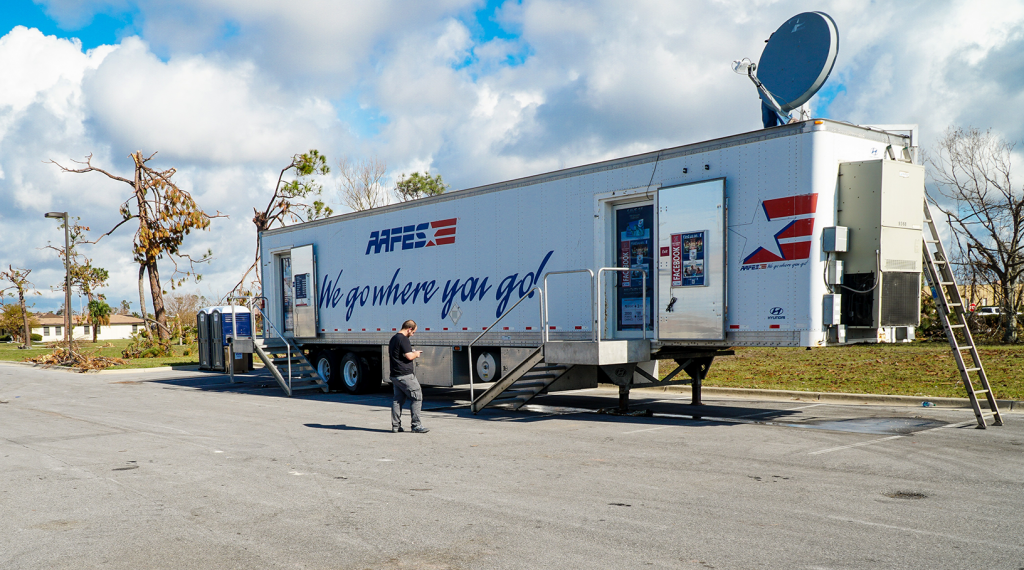 The Exchange Service opened its mobile field exchange at Tyndall AFB Oct. 21—the only store within miles supporting hundreds of service members as they rebuilt after Hurricane Michael. 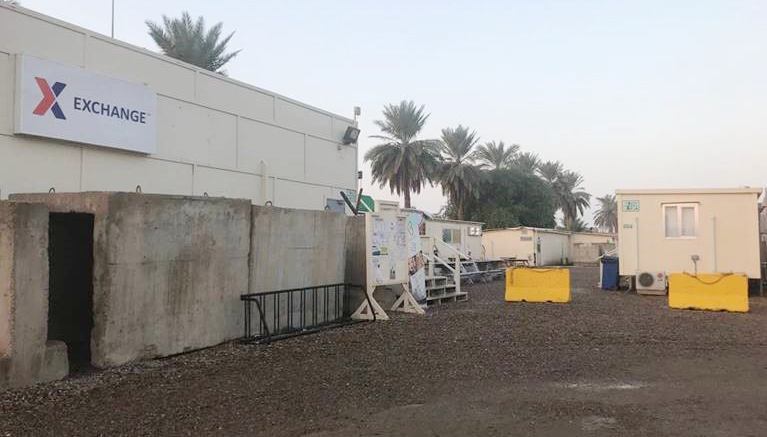 The Exchange continues serving America's Warfighters at the tips of the spear in Afghanistan, Iraq and elsewhere in Southwest Asia and the Middle East. 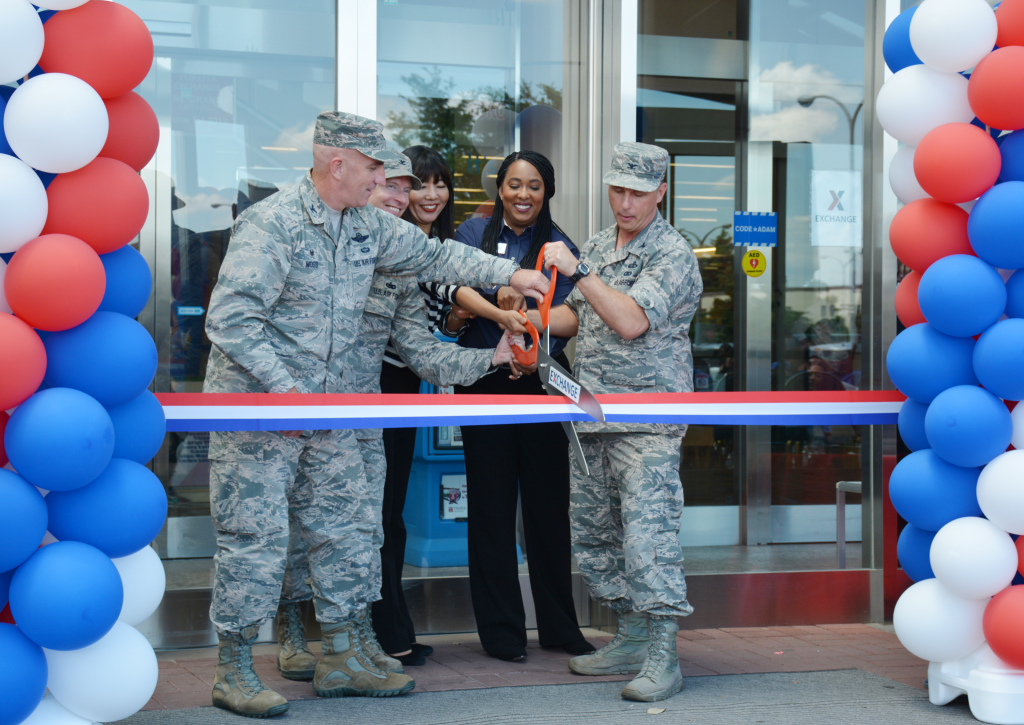 Read other columns from Director/CEO Tom Shull  in the Exchange Post.