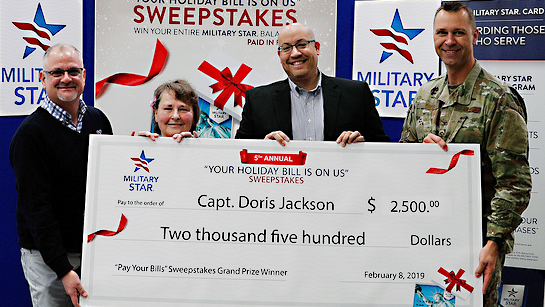 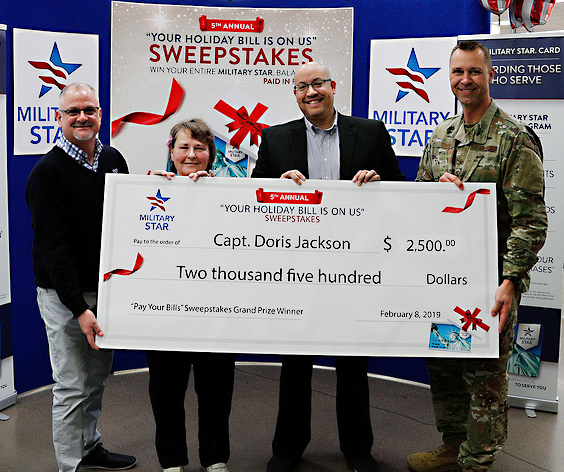 Exchange thanks Airman for 20 years of service.

NELLIS AFB, Nev. – When retired Air Force Capt. Doris Jackson first received a phone call from the  Exchange telling her that they would be paying off her MILITARY STAR® credit card bill, she thought it was a joke.

Jackson is one of five grand-prize winners of the fifth annual Your Holiday Bill Is On Us Sweepstakes, out of more than 6 million entries worldwide.

She was presented with her prize at the Nellis Air Force Base Exchange on Feb. 25. Because the grand prize minimum of $2,500 eclipsed her card balance, Jackson also received a statement credit in the amount of the difference. 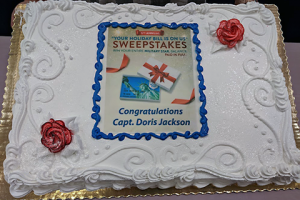 Nellis Exchange managers honored Jackson during the celebration and presented her with an oversized check.

“The Exchange serves the best customers in the world,” said Exchange General Manager Matthew Beatty. “We consider it an honor to be able to thank Capt. Jackson for her service with this sweepstakes.”

For someone who served her country for 20 years in the Air Force, including during the Gulf War, it’s no surprise that Jackson plans to use her winnings for others.

While she typically visits the Nellis Exchange to stock up on household supplies and diapers for her granddaughter, Jackson is also looking forward to using part of her prize to splurge on new clothes for her daughter and herself.

Collaboration with all military exchanges

During November and December, shoppers automatically earned an entry in the Your Holiday Bill Is on Us Sweepstakes every time they used their MILITARY STAR cards at any military exchange, ShopMyExchange.com, myNavyExchange.com or at the commissary.