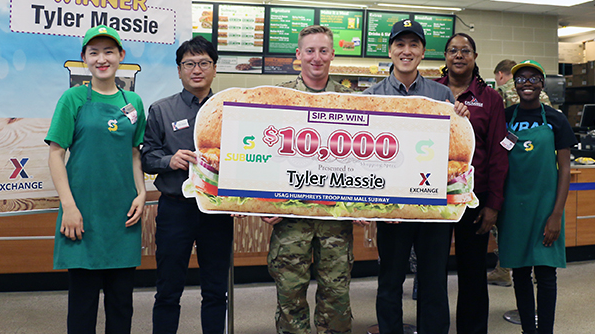 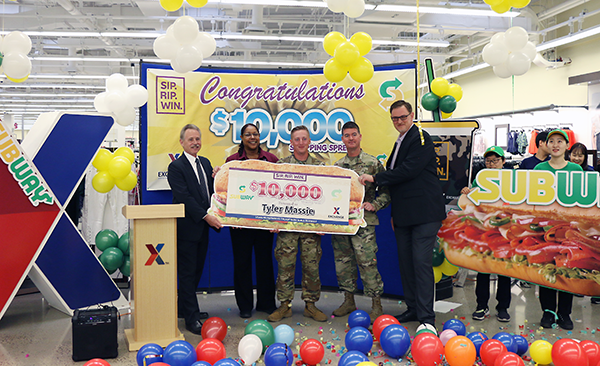 CAMP HUMPHREYS, South Korea –  Soldiers returning from the field, tired and hungry, is not an unusual occurrence at U.S. Army Garrison Humphreys in Pyeongtaek, South Korea. What is unusual, at least for one Soldier, was being in the right place at the right time and winning big at Subway.

Massie, from Manns Harbor, N.C., peeled the prize tab on his drink to reveal a huge surprise: a $10,000 shopping spree at the Camp Humphreys Exchange as part of Subway’s Rip. Sip. Win. sweepstakes.

The presentation of Massie’s Exchange shopping spree included balloons dropping, streamers and leadership from the Exchange and military community attending to say a few words and congratulate the winner.

“What an honor it is to be able to present this shopping spree to Pvt. 1st Class Tyler Massie. Who knew ordering a healthy combo meal could win you $10,000?”

Stationed out of Fort Bliss, Texas, Massie said he has a lot of things he’s hoping to buy when he gets the chance to start spending some of that prize money, but he mentioned some things have priority.

“I’m looking forward to getting a nice computer for school that I never thought I would be able to buy on my own,” he said. “Also, a good pair of headphones and an Apple Watch because I’ve always wanted one, but I just couldn’t bring myself to buy one. I definitely never expected something like this to happen.”

Massie has been in the Army for just 18 months and is excited about what the $10,000 prize can do for him.

“I really think this prize money will help my life be a little better,” he said. “Winning this sweepstakes sure made getting sent to South Korea much more exciting.”