William Moring got to know the Exchange as a child when he moved from base to base with his father, who had a 35-year career here that included stops at Fort Benning, Maxwell-Gunter Air Force Base, Rickenbacker Air Force Base, Iraq and Fort Worth, among others.

Moring followed in his father’s footsteps in 2004, joining the Exchange as a financial management trainee. 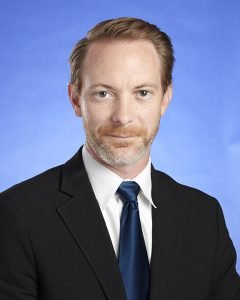 William Moring joined the Exchange in 2004 as a financial management trainee. He is now an assistant treasurer.

“While he was actively working at the Exchange, it was always nice to bounce ideas off of him for a Region perspective,” Moring said of his father, Dave Moring, who retired as a general manager from the NAS Fort Worth JRB Exchange in 2011.

Moring is a third-generation family member working at the Exchange.

Moring’s wife, Melissa, a buyer, also has a third-generation affiliation with the Exchange. Her father, Bob Philbin, retired as a Western Region VP in 2003 after 32 years. Her grandfather was briefly an Air Force Exchange officer in Tripoli during his career.

“We consider it a great honor to carry on our families’ legacy of serving those who serve at the Exchange,” William Moring said.

Moring worked in the corporate world before joining the Exchange.

“Just as when I started in 2004 until this day, I truly love our mission and devotion to the military community,” he said. “It means so much more to operate and produce a dividend for our Warfighters, their families, retirees, and now the Veteran communities—rather than stockholders.”

Facebook-friendly version: William Moring is a third-generation family member working at the Exchange, following in his father’s footsteps by joining the Department of Defense’s largest retailer in 2004.