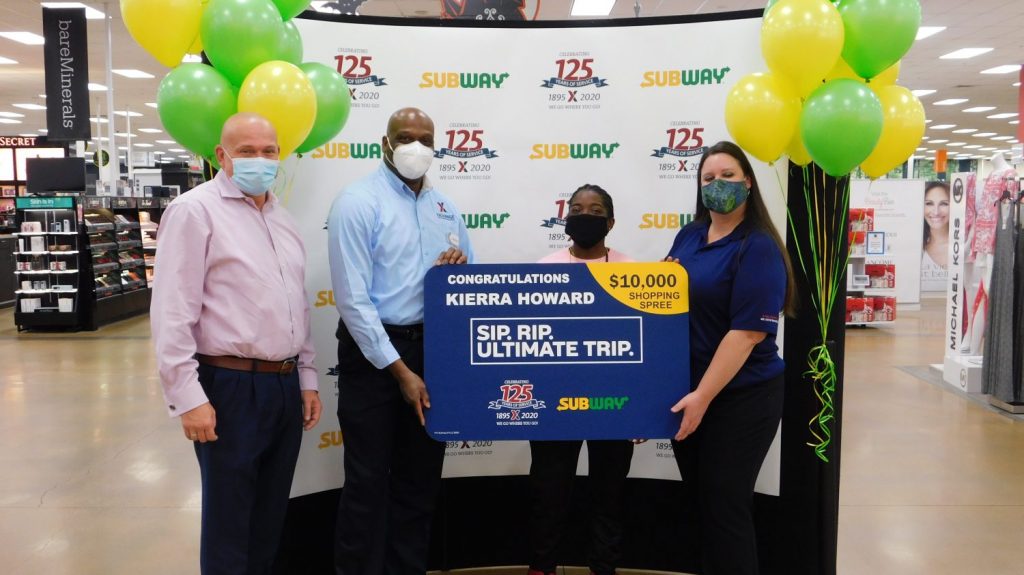 Sgt. Kierra Howard’s weekly visits to the Subway paid off in a big way, and she decided to give some of her good fortune back after she won a $10,000 shopping spree in the Army & Air Force Exchange Service’s Subway Sip. Rip. Ultimate Trip sweepstakes.

Howard, who serves in the 749th Ordnance Company at Fort Carson, said she initially didn’t think she had won after she pulled the sweepstakes tab on her drink.

“I didn’t know if it was real or not,” said Howard, who has served in the Army for three years. “But I quickly got very excited and to think about the possibilities for how to use this prize.”

The Fort Carson Exchange honored Howard at a short ceremony Oct. 20, and then she had the main Exchange to herself as she filled up her carts.

She picked up some electronics for herself but also decided to give back to the community as she added socks, blankets and personal hygiene items to donate to families in need.

“I just wanted to make sure people were taken care of for the winter,” she said.

The sweepstakes is part of the Exchange’s 125th anniversary celebration, which commemorates its “we go where you go” mission.

“The Exchange is happy to reward our Warfighters and their families for the sacrifices they make every day,” Colorado Springs Consolidated Exchange General Manager Lawrence Simmons said. “Sweepstakes like these are another way for the Exchange to say thank you for your service.”