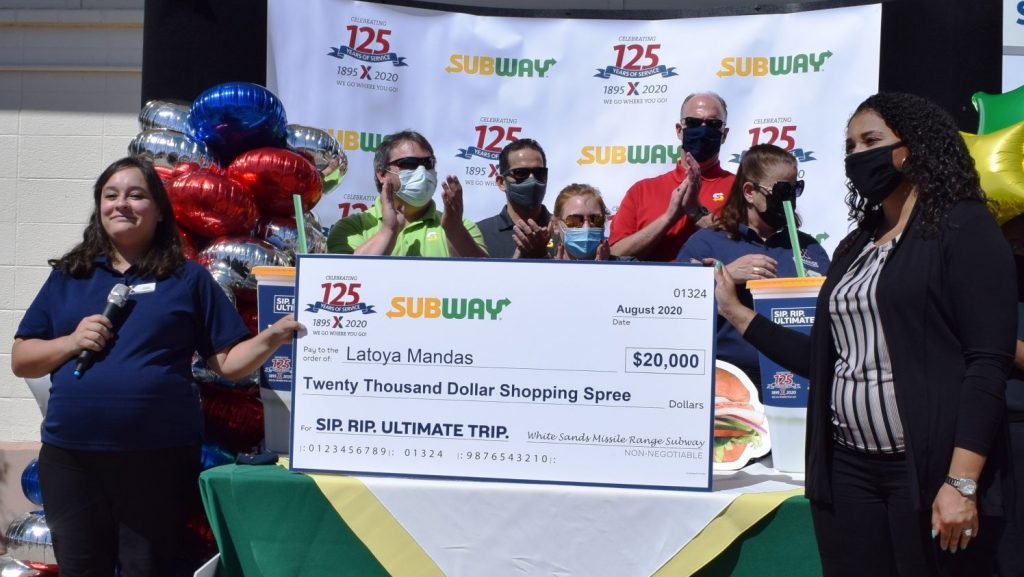 Army Veteran Latoya Mandas didn’t take it seriously when she pulled the tab on her lemonade and saw that she was a grand-prize winner in the Exchange’s Subway Sip. Rip. Ultimate Trip sweepstakes.

But after a few moments of disbelief, it was confirmed. Mandas, a regular customer at Subway in the White Sands Missile Range troop store, had won a $25,000 shopping spree.

“I just went in one day for a meal, and they gave me a cup with a peel-off label,” Mandas said. “I pulled it, and I thought, ‘What is this?’” 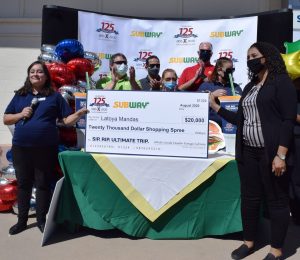 Mandas, whose husband, Staff Sgt. Cory Mandas, is assigned to White Sands Missile Range, was honored by the Exchange in a ceremony Sept. 30.

“She was really excited to hear that she won, but she had a hard time believing it,” said Brandi Army, White Sands Missile Range troop store manager. “She thought she was being pranked.”

Mandas won a grand-prize family vacation, but because COVID-19 restrictions have made travel more difficult, she decided to put her winnings toward a $25,000 Exchange shopping spree.

With three children and a fourth on the way, Mandas and her family have plenty of options.

“We’d like to update our house with some new furniture and give some new electronics to our kids,” she said. “One’s about to go off to college, so how about a MacBook?”

She also has other plans for some of her winnings.

“We are proud Army all the way,” she said. “I would love to find a way to give back to the community that has served us so well.”

“The Exchange is honored to recognize families like Latoya’s by helping them see their dreams come true,” said Exchange General Manager Michael Brennan. “Sweepstakes like these let our Warfighters and their families know that their hard work and sacrifices are greatly appreciated.”