Scott Montgomery is proof of the ability to move up at the Exchange. He started his career as a warehouse worker, and he will finish as manager of the Exchange’s largest distribution center.

“I’ve been looking back a lot lately, even back as far as my first day in 1980,” said Montgomery, who is retiring Oct. 30. “I remember during orientation we actually used a movie projector.”

Montgomery says one of his proudest moments came during Operation Desert Storm in 1990. 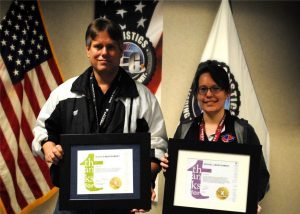 “That really changed things at the Atlanta Distribution Center. We went from a regular distribution center to where we suddenly had to gear up and work around the clock,” he said. “Everyone pitched in to get it done. It meant working a lot of hours, but everyone was really all-in to support our Warfighters.”

Montgomery was instrumental in the launch of Dan Daniel’s new warehouse management system, which debuted in February.

“We really came together as a team and got it done,” Montgomery said. “It was a very challenging task, but it was also very rewarding to observe as we put all of the pieces in place and got it running.”

Montgomery says he’s been feeling nostalgic lately as his retirement approaches. His daughter, Rachel, a logistics operations manager at the West Coast Distribution Center, is feeling sentimental, too.

“I am so incredibly proud of my dad,” Rachel said. “To be able to have the kind of career he has had, to be able to give back to the Exchange the way he has, it’s just great feeling to see him leave on such a high note.”

“When I was given my five-year service award, it really gave me a lot to think about,” he said. “That’s when I decided I was going to stay.”

Scott’s father, Robert, who served 24 years in the Air Force, was a quality assurance inspector at the Atlanta Distribution Center until he retired in 1992. Scott’s mother, Jeannine Montgomery, also worked for the Exchange in Atlanta.

Rachel, who has worked for the Exchange for 14 years, also began her career at the Atlanta Distribution Center.

She deployed to Iraq during Operation Iraqi Freedom in 2008-09, something that she says changed her life.

“To be honest, I was a little skeptical at first and didn’t know what to expect,” she said. “But once I got there, I really thrived. It helped me become the manager I am today.”

Scott says he is an example of how the Exchange encourages its associates to grow.

“I started on the ground floor as a warehouse worker and spent several years doing that,” he said. “At that five-year mark I had to decide if I wanted to commit to Exchange or move on. I never dreamed I’d wind up as a DC manager. It’s incredible that I could have so much success, but my story is not unique to the Exchange. You really can move up here.”

Facebook-friendly version: Scott Montgomery and his daughter Rachel exemplify the core value of family serving family, as both have made the Exchange the only career they have ever known. 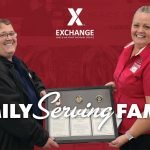