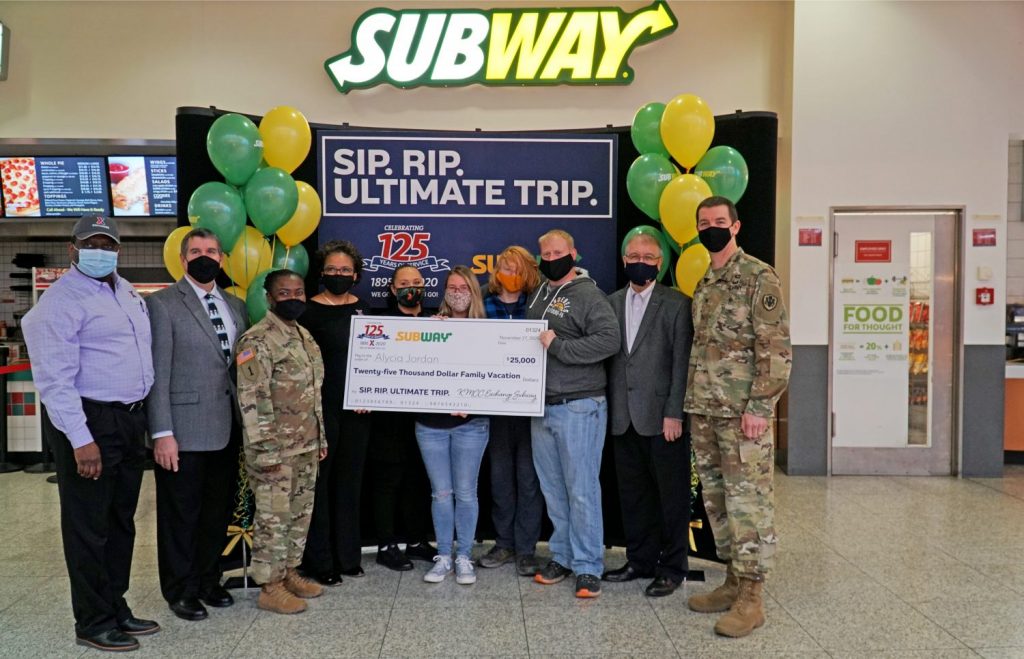 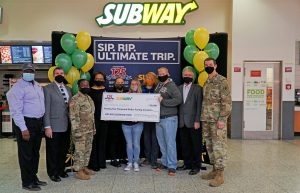 Alycia Jordan, center, and her family were presented with a $25,000 dream vacation at the Kaiserslautern Military Community Center Exchange food court at Ramstein Air Base on Nov. 27 as part of the Subway Sip. Rip. Ultimate Trip sweepstakes. (U.S. Army photo by Sgt. 1st Class Taresha Hill)

The day Alycia Jordon won was typical for her. She left work at the Ramstein Air Base Child Development Center and met her husband and son at Subway for dinner before attending her son’s Boy Scout meeting. But it wasn’t until later, after returning home, that Jordan came to realize she was seconds away from tossing $25,000 into the trash.

“I honestly couldn’t believe I won,” Jordan said. “I was going to toss my drink into the trash without pulling the tab‒ it’s been surreal.”

The Subway Sip. Rip. Ultimate Trip sweepstakes is part of the Exchange’s 125th anniversary celebration, which gave Warfighters and their families the chance to win prizes such as dream vacations, shopping sprees, gift cards and more with peel-and-win game pieces attached to beverage cups at participating Exchange Subway locations. Jordan chose the trip because she wanted to spend more time with her husband and son.

“We wanted to make memories and buying stuff wouldn’t do that for us,” Jordan said. “This trip will be something that we will never forget.”

Jordan said she was leaning toward vacationing in Fiji once the COVID-19 pandemic subsides.

“We’re still not sure, but it’s definitely going to be somewhere warm,” she said, laughing. “We’ve got two years to decide.”

“The Exchange enjoys being able to reward our service members and their families,” McFarland said. “They give up so much, and we appreciate the sacrifices they make to serve our country.”