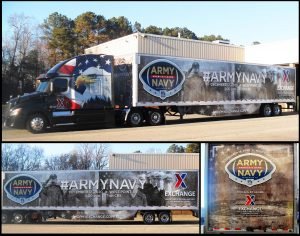 The annual Army-Navy Game is returning to its roots, and the Army & Air Force Exchange Service is celebrating the game’s 121-year history with a special truck design.

For the first time in 77 years, the Army Golden Knights will be on their home turf as they face the Navy Midshipmen at the United States Military Academy in West Point, N.Y. The game will take place Dec. 12 at 3 p.m. EST and will be televised on CBS.

The Exchange truck wrap, which is the third the Exchange has designed for the Army-Navy Game, features black-and-white images of Cadets and Midshipmen. The Exchange has been a participating partner of the game since 2018.

“We wanted a timeless, classic look,” said Exchange Creative Director Johnny Olson, who designed the truck wrap. “Rather than something flashy, it’s more of a throwback to honor the long history of the game.” 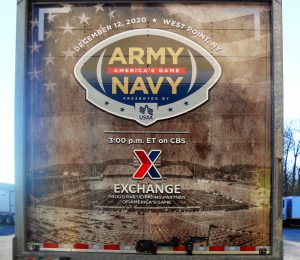 The back of the truck features an image of West Point’s Michie Stadium, which hosted the 1943 game and is where this year’s game will be played.

The truck will be at the Army-Navy Game and serve as a 53-foot billboard for the Exchange’s support of the game and the Services. After the big game, the truck will hit the road, delivering merchandise from the Exchange’s Dan Daniel Distribution Center in Newport News, Va., to Exchange stores throughout the eastern United States.

The game has typically been held in Philadelphia in recent years to accommodate the large crowds the game draws, but will be at West Point due to state limits on gatherings during the COVID-19 pandemic.