The worldwide virtual event, which was held in November in honor of American Indian and Alaska Native Heritage Month, encouraged associates to submit photos featuring moccasins that they own or had borrowed, which were shown being worn or displayed.

“The culture and creativity displayed in the entries we received were inspiring,” said Bee Persaud, diversity and inclusion specialist for the Exchange’s Office of Equal Opportunity. “Not only was the event fun, but it was also successful in celebrating the history of the Native American Nations and recognizing associates who demonstrate the importance of diversity and inclusion in the workplace.”

For their winning photo, the Kirtland associates each donned a pair of moccasins. While adhering to safety protocols during the pandemic, they sat on the floor at the Kirtland Express gathered around a poster that read “Kirtland Exchange Rock Your Mocs.” The photo was snapped pointing down at the group from atop a ladder.

Oranday led efforts to coordinate the Kirtland associates who participated in the photo.

During the photo shoot, she sported for the first time a pair of moccasins that were given to her a year ago. “I wasn’t sure how to walk in them because they’re a little bit slick on the bottom,” Oranday said, “but they’re comfortable.”

Roanhorse, who is Navajo, was excited for an opportunity to wear again the moccasins that were custom made for her when she was a teenager.

“I haven’t brought them out since I graduated from high school, so it’s been about 10 years,” she said.

Roanhorse considers her moccasins to be more than just special-occasion footwear. “They mean a lot to me,” she said. 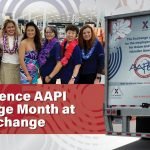 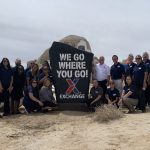