Although sisters Tessa and MaKayla Cooper grew up shopping at the Exchange, neither thought they would become Exchange associates—let alone at the store where their mother, Rebekah Cooper, also works.

“I never thought that we would all work at the same place, but that’s what happened,” said Rebekah, who began her Exchange career in April 2016 as Troop Store cashier while her husband, now-retired Army Sgt. Willie Cooper, was stationed at Fort Riley.

Later that year, after Willie was transferred to the United States Military Academy, Rebekah secured a position as a Military Clothing cashier at the West Point Exchange main store. She later became a shift manager at the Express, and for the past two years has served as the warehouse foreman at the main store.

“I do all the receiving and keep the warehouse neat and tidy so it’s easy to find things,” Rebekah said. “I like to organize. I’m very meticulous back here.”

When Willie retired from the Army after a 20-year career, he also joined the Exchange team, working at the West Point Express for a year.

In 2017, Tessa Cooper applied for her first job ever at the West Point Exchange main store and is now a member of the Softlines team.

The following year, MaKayla Cooper followed in her mother’s footsteps and started as a Military Clothing cashier before moving to the Ship-from-Store team.

“One of the things that I like about this job is that I’m constantly walking around,” said MaKayla, who can rely on her mother and sister to help her locate items at the store. “I usually follow them so I know where it is for the next time.”

Tessa said she enjoys working at the Exchange with her family. “Even though I’m living with them, we can still come to work and be professional. When we get home, we can just talk about everything and spend time together.”

The Cooper family, from left, MaKayla, Rebekah and Tessa, are associates at the West Point Exchange main store. 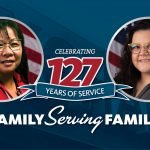