The first Army/Air Force Game at a neutral location since 1965 ended in a thrilling 21-14 overtime victory for the Army Black Knights, maximizing brand exposure for the Exchange this past weekend.

“Our research shows that football is military shoppers’ connection to home,” said the Exchange’s Director/CEO Tom Shull. “A competitive game maximizes the impact of our messaging, and this year’s Commanders’ Classic delivered a big win for Team Exchange.” 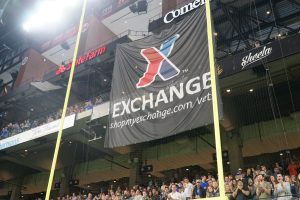 Exchange branding was on full display throughout Globe Life Field at the inaugural Commanders’ Classic.

Television commercials that aired throughout the game on CBS were produced in-house by the Exchange’s Digital Media Networks team to promote Veterans in-store and online shopping benefits. The game-day blitz was a success, with more than 2,000 ShopMyExchange.com accounts authenticated during the Commanders’ Classic. Less than 24 hours after the final whistle, more than 700 of these newly authorized shoppers placed more than $80,000 in orders from ShopMyExchange.com.

Exchange associates shared snacks provided by vendor partners and a history lesson on the Exchange’s We Go Where You Go mission with 2,000 Army and Air Force Cadets who huddled in the muster area before marching to Globe Life Field. 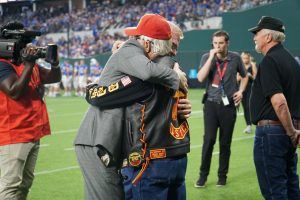 “These efforts are a total team effort across the organization,” said Corporate Communication Senior Vice President Sandi Lute. “Special shoutout to our Merchandising, Logistics and General Counsel teammates for all they did to make the Commanders’ Class a success for the Exchange.”

For the 32,000 fans at the game, the most poignant moment took place at the end of the third quarter, when four North Texas Vietnam Veterans were publicly thanked on the field for their service. The Exchange and the Vietnam War Commemoration, including its director, retired Maj. Gen. Pete Aylward, presented the heroes lapel pins on behalf of a grateful nation. The Veterans, including Army Sgt. Glen Copeland (1967-1968), Marine Corps Sgt. James Painter (1971-1972), Seaman Don Foster (1969-1971) and Lt. Col. Dennis Haessig (1972-1973), earned a standing ovation. 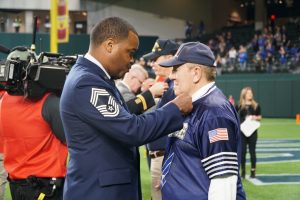 “Presenting pins to these four Warfighters was truly moving,” Shull said. “Vietnam Veterans did not receive the homecoming they rightfully deserved so many decades ago. Hearing the roar of the crowd and seeing the fans jump to their feet was an incredible tribute—this will be a lasting memory for all who took part.”

The Exchange is a supporter of Army West Point Sports and Air Force Athletics. The organization’s presence at football games shows the Nation that the Exchange is where heroes shop.

Exchange associates can catch up with the game-day excitement by: 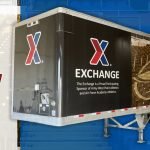