Vietnam Veterans Honored at Pinning Ceremonies at PXs, BXs around the Globe

In honor of National Vietnam War Veterans Day on March 29, the Exchange honored Vietnam Veterans at more than 150 of its locations worldwide.

Vietnam Veterans were invited to attend the events at their nearest PX or BX and receive a complimentary lapel pin as a token of thanks for their service, valor and sacrifice. 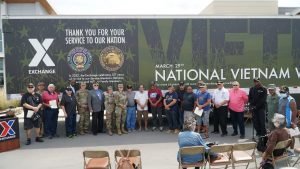 “So many of these Veterans did not receive much gratitude or respect at the time of their service,” said Exchange Director/CEO Tom Shull, a Veteran who served during the Vietnam War period. “The pinning ceremonies are a chance for the Exchange to do its part in giving them the proper thanks and recognition they deserved then and deserve now.”

The lapel pins were provided in partnership with the United States of America Vietnam War Commemoration, with whom the Exchange has partnered for over 500 commemorative events honoring more than 60,000 Vietnam Veterans.

Veteran John Sides received his pin at the Camp Walker Exchange in South Korea. He served 38 years in the Navy, including six years in Vietnam.

“It was tough times,” said Sides, who also noted the deep bond that exists among Vietnam Veterans. “We’re all brothers.” 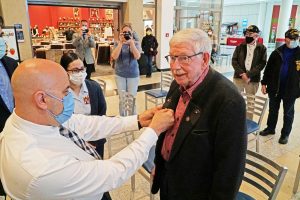 Perry Bevins served two tours in Vietnam as an Air Force helicopter pilot and retired as a master sergeant after 21 years. He received his pin at the Kaiserslautern Military Community Exchange in Germany.

“There was no question that it was a brutal,” Bevins said of the war. “But serving in the military taught me the discipline I needed to make it in life.”

The message “A Grateful Nation Thanks and Honors You” is engraved on the back of each pin – the side closest to the wearer’s heart.

The Exchange hosted a Facebook live broadcast of the pinning event at Fort Sam Houston, where Veteran Al Johnson received his pin.

“We didn’t get the kind of recognition that we should have,” said Johnson, who served as an Air Force staff sergeant. “There was a lot of turmoil in our country over that conflict, and there were a lot of protests. When we came back, we were not heroes. So this is an opportunity to sort of right that ship. We’re not looking for any accolades, but just to hear that ‘thanks’ means so much.”

The Exchange is a 50th Anniversary Vietnam War Commemorative Partner, planning and conducting events and activities that recognize Vietnam Veterans and their families for service, valor and sacrifice in conjunction with the Commemoration.

Send your best Vietnam War Veterans Day pictures to [email protected] and [email protected] We’ll include them in a special Flickr album. Please attach the original image to the email and include names of all people pictured. 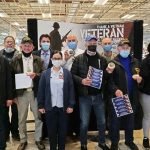 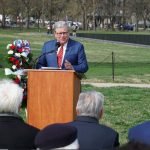 ‘Four Decades Later, This Memorial Continues to Heal Our Country’ 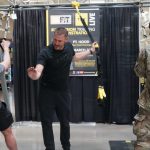 Exchange Takes ‘BE FIT Live’ on the Road to Fort Hood

‘Four Decades Later, This Memorial Continues to Heal Our Country’

Exchange Takes ‘BE FIT Live’ on the Road to Fort Hood