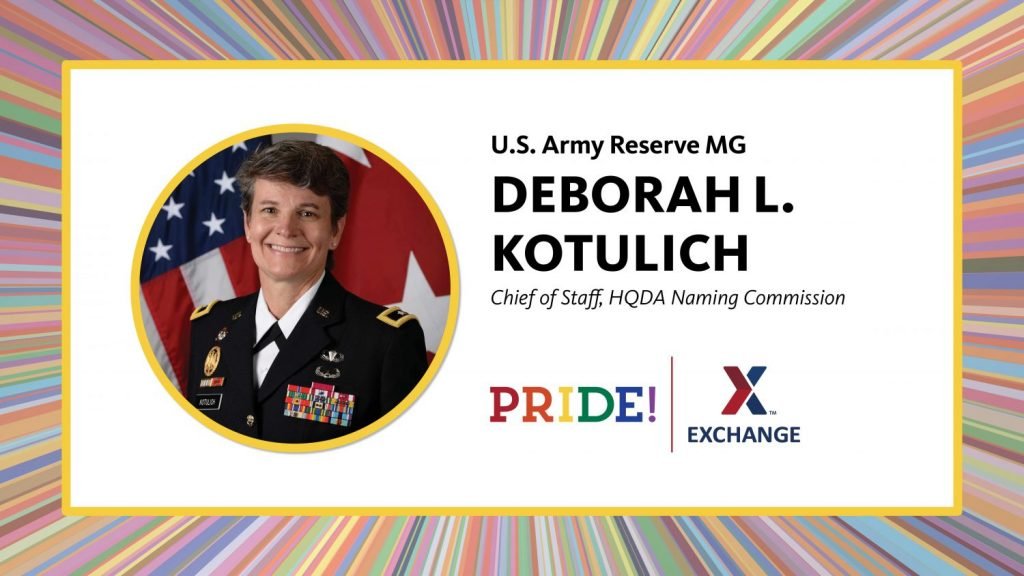 During a virtual lunch-and-learn on Wednesday, Army Reserve MG Deborah L. Kotulich discussed her journey as a gay woman in the military during the late 1980s, the “Don’t Ask, Don’t Tell” era and beyond.

Kotulich grew up in a family that didn’t have many military connections. In high school, she was a scholar and an athlete who didn’t consider becoming an Army officer. But a guidance counselor thought she would be a good fit at the U.S. Military Academy at West Point. In 1986, Kotulich applied and was accepted, and her Army journey began.

“That was only the sixth year of women being at West Point,” Kotulich said. “The first class had graduated in 1980. I was in only the 10th class to graduate with women. Now it’s not as unique, but back then it was still pretty new.”

At West Point, Kotulich developed a sense of service that inspired her to become an Army officer. She also began to understand who she was as a lesbian.

“Back in those days, those two things weren’t necessarily compatible,” she said. “Many may remember that there were many enlisted Soldiers and noncommissioned officers who were being discharged for being gay, and in some cases they were being dishonorably discharged. Some were being court-martialed. So it was really kind of a terrible time.”

Kotulich said it took more than a decade before she was entirely comfortable as a gay woman in the Army.

“In 1993, President Clinton came into office and it was during that time that ‘Don’t Ask, Don’t Tell’ was passed,” she said. “The theory was that LGBTQ service members could serve but they couldn’t say anything about their sexual orientation. And if you were a leader or another Soldier, you weren’t supposed to ask. [But] as it turned out, there were still plenty of really dedicated men and women who were being discharged in spite of that.”

“Don’t Ask, Don’t Tell” was repealed under President Obama, but not until 2011, after he had been in office for more than two years. Gay marriage was legalized in 2015. But Kotulich said her first two decades-plus in the Army were a strange time for her.

“I sincerely enjoyed my time as an Army logistician and an Army officer,” said Kotulich, who served in infantry divisions in Germany and South Korea when she was on active duty. “I used to say back then that I was ‘Hooah, hooah, three bags full!’”

She thought highly of her leaders, respected her peers and fellow officers, worked hard and had the opportunity to be a leader herself.

“I told myself that if I worked hard and did the very best that I could, everything I did would be valued and my leaders would appreciate that and recognize that I wasn’t some sort of evil person or social deviant,” she said. “But no matter how hard I worked, in the back of my mind, there was a risk, and it wasn’t as fulfilling as I would have liked it. Nonetheless, I really enjoyed everything I did and I made the Army first in my personal and professional life and gave it everything I had.”

In 1997, Kotulich’s mother was diagnosed with chronic lymphatic leukemia. Her mother was living on her own, working in a department store to support herself. Kotulich chose to leave active duty to support her mother.

“I didn’t want to leave,” she said. “I actually cried during my award ceremony. The very next day when I went over to out-process, the gentleman slid a piece of paper across a desk and told me to sign it. I said, ‘What is that?’ and he said, ‘That’s where you’re going to resign your commission.’

“That stopped me in my tracks,” she continued. “I was shocked at the thought of resigning my commission as an officer. It was almost unfathomable. I asked if I had any other choices and he said, sort of matter-of-fact, ‘Well, you can go into the Army Reserve.’”

At the time, she didn’t know what that meant, but she decided to sign up if it meant keeping her commission. She moved to Arlington, Virginia, and became a consultant and partner with IBM Global Business Services, where she has been for the past 19 years.

She also has had a satisfying 25-year career with the Army Reserve. Her mother lives with her and is doing well. In 2016, Kotulich married a woman she had been in a committed relationship with. They have two adult daughters.

That year, Kotulich assumed command as a brigadier general of the 143rd Expeditionary Sustainment Command in Orlando, Florida. Her wife and daughters attended the change-of-command ceremony. In 2018, Kotulich’s headquarters moved to Central Command so the sustainment mission could be run under the Theater Sustainment Command. Her wife was also able to attend the departure ceremony.

“It was a really interesting day when I was able to get my wife her own military-spouse ID card,” Kotulich said. “While I was deployed, she had the opportunity to go on to the post near where we lived and go to the Exchange and get gas on her own and go to the Class Six. She saw what a really good deal it is.

“Once ‘Don’t Ask, Don’t Tell’ was repealed, my life got immeasurably better,” Kotulich added. “So did hers, and so did the lives of my daughters.”

Kotulich then segued into talking about her experiences with the Exchange. Her deployments took her all over the world—to the Pacific, Europe, Afghanistan, Iraq and more.

“In 2004, that was my very first deployment to Iraq,” she said. “I was traveling all over Iraq to plan for the placement of incoming sustainment troops. … I can tell you that I went to some incredibly austere locations. I think using the word ‘austere’ is possibly generous, but in 2004, AAFES was always there.

“[I would] walk out of this bizarro world of deployment into something that was very familiar, that was this return to normalcy. Seeing things like a drink or a candy bar or chewing gum meant a lot. The men and women who operate your locations in those areas are absolute patriots and that has stuck with me from those early times.”

Kotulich recalled an incident in June 2004 when a rocket struck near an Exchange at Balad Air Base in Iraq. According to the Defense Visual Information Distribution Service (DVIDS), three Soldiers were killed and 23 service members and civilians were injured. The store was damaged in the attack but reopened quickly.

“Within 72 to 96 hours, big sheet sheets of plywood covered areas where there were glass windows and glass doors,” she said. “The BX reopened, and Soldiers gravitated back there because it was somewhere to go for normalcy and camaraderie. It absolutely exemplified your motto, ‘We go where you go.’”

If you missed the lunch-and-learn, you can view it here.

Oldenburgh presented Lohmann with the Exchange PRIDE Leadership Award, which is made of crystal and has a rainbow design. “Your contributions have been tremendous,” Oldenburgh told Lohmann. “Without you, I don’t think we would be here doing what we’re doing today.” 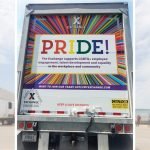 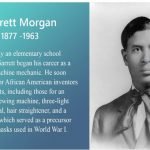 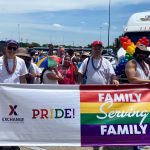